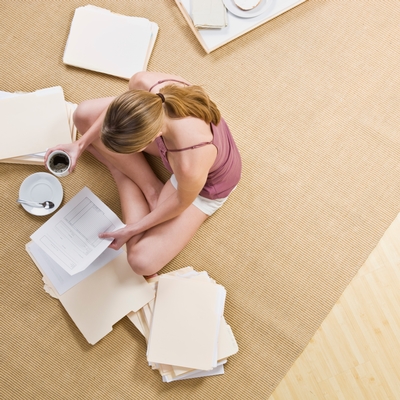 As February rolls around, you may have already forgotten about those New Year’s resolutions you were so set that you were actually going to accomplish this year. If you made financial resolutions, whether to save up money, pay off debt, or start contributing toward retirement—it’s not too late and you don’t have to give up on your financial resolutions just yet.

Here are three easy ways to stick with your goals for 2014:

Take Baby Steps. Too often, we want what we want, and we want it right now. In a world of instant gratification, it can be hard to realize that the best things are worth fighting for and take some dedication and commitment on your part.

If it’s 30 days in and you haven’t even been able to start on those goals that you were so committed to just 30 days ago, don’t fret. You don’t have to give up, you just have to work on baby steps. As an example, my husband and I made an audacious goal of contributing $30,000 toward our savings this year. We are way behind on our goal because we’ve only been able to contribute $300 this past month due to some financial circumstances.

But that doesn’t mean we just give up altogether; we just need to reevaluate our plan. If your debt load seems like an unimaginable burden to pay off, that doesn’t mean you stick your head in the sand and hope it goes away—it just means you need to break it down into smaller chunks. Start by putting $10 a day toward your debt. $10 a day isn’t much, it’s probably what it costs for you to buy lunch every day. So start packing your lunch and putting that money toward your financial goals first.

Divide up your goals. Expanding on the idea of taking baby steps, perhaps you need to really chop up your goals for the year. A year can seem long—it’s a whole 365 days or 52 weeks. SO you may be tempted to put it off until the end of the year thinking you have plenty of time to reach those goals. Instead, break it down. Melissa gives you great insight on how to accomplish your goals a quarter at a time.

Be Realistic. Perhaps your goal is too far fetched. A goal should be a bit complicated to reach, but it should still be attainable. Cat gives great examples of ways to set smaller goals in 2014.

And also? Let yourself have fun. Just because you have financial goals of paying off debt, saving, or some other financial goal, doesn’t mean you have to put your “fun” life on hold until you reach it. While some people have done that and achieved great results, you can also still have a good time by taking it one day at a time and allowing yourself a fun budget as well.