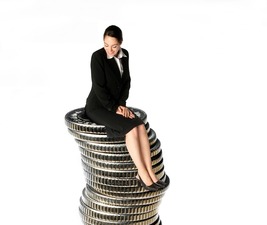 When I graduated college in 2006, the job market was still pretty healthy. However, unlike my econ and science-major friends who were snagging high-paying, well-respected jobs, jobs for English majors like me were few and far between and not paying very well.

At the time, I was starting to think I should have listened to everyone who asked “What will you ever do with an English major?” But less than five years after college graduation, I had more than doubled my salary—this is how I did it.

All I had coming out of college was a part-time job offer with no health benefits making $11 an hour as a reporter’s assistant for a small metro newspaper.  Having worked there as an intern the previous summer though, I knew that I loved the job and the people and I figured I would make it my mission to land a full-time job. For eight months, I smiled while I did grunt work for anyone that asked. And when the hiring freeze was finally lifted, I was one of the first to land a full-time job—with a pay increase and health benefits. I considered this first full-time job as the starting point in my career.

Always Be on the Lookout for Opportunities

I was thrilled when I finally landed my full-time newspaper reporter job. And for a while, I really thought I would stay there for a very long time. Oh, to be young and naïve.

Within that year, the newspaper was pounded hard by the economy, lay-offs were occurring quarterly, and pay decreases were the norm. As much as I loved the job, I knew I had to get out. When a co-worker mentioned an entry-level position at a small public relations firm, I pounced on it. Two weeks later, I had the job and a $10,000 annual pay increase.

Don’t Wait for Disaster to Strike

An entry-level PR position at a small firm was a great place to gain experience and learn the ropes of a new industry. However, in 2009, the economy pretty much tanked and so did our firm. As soon as it got slow at work, I started looking for a new job. In fact, the week I found out I landed a new job at a national advertising agency, was the week my boss cut my working days from five to three.

My new job came with a $12,000 pay increase. I was feeling pretty good about myself, but it was still mid-2009. And almost as soon as I started my new job, the talk of impending doom started around the water cooler.

I didn’t like the uncertainty at my new job, and the rumors of a large scale lay-off were deafening. So I began my job hunt once again. I reached out to all my friends, all my former supervisors, and colleagues and asked them to please forward my information.

One of my contacts sent me a tip on a Friday morning, and by Monday evening I had landed a new job with a pay increase to boot. I was laid off two weeks later (less than six months after I had started there), and started my new job the next day.

The new job had wanted to offer me less than I had been making and I flat out refused. I said, “This is my final offer, take it or leave it.” Luckily, they met my request because I really had no other options, but I refused to go backward and earn less, when I knew what my real worth was.

A year and half later, after a change in management, I was on the job hunt again. This time, it took me six months to land a job. If you’re keeping track, that’s five jobs in five years, and I more than doubled my salary from my first full-time job as a newspaper reporter.

To the recent college graduates: don’t get discouraged if you’re not making as much as your friends. Give yourself some time to catch up. Always pay your dues and be on the lookout for opportunities. And then opportunity presents itself, pounce on it! You too can more than double your income in less than five years out of college.