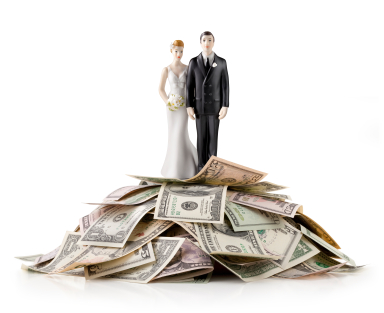 When my husband and I got married, we were broke. So broke that we had to downsize from our one-bedroom apartment to a studio loft. It was really hard being broke and the debt really took a toll on our relationship.

But here we are, almost four years since we’ve been married, and we’ve paid off all our debt and are making double what we were making when we first got married.

If you’re struggling in your relationship because of the financial toll, this post is for you. I wanted to share the tips I wish someone would have given me back when all our arguments seemed to be about finances.

Have a Game Plan

A few months after we were married and we actually got serious about paying our debt, my husband and I calculated all our cumulative debt and realized we were $45,000 in debt! It was a total shock and the number seemed insurmountable.

We were making a pittance, living in a shack, and saving up for my husband’s upcoming four-month leave for work to attend a fire academy. And now here we were with more debt to pay off.

Having a set number each month that we would contribute to debt, helped us come up with our estimated “payoff debt”—the official date we would be debt free. Originally, we thought it wouldn’t be til 2015 at some point. And we beat that number by a whole year.

See Yourself as a Team

Too often, my husband and I would have arguments about money. I wanted to pay off debt as much as possible and my husband felt suffocated by how stringent I would be with expenses. We were playing on opposing teams.

It took us a while to really find our groove. I had to loosen up a little bit and not get mad over every $3 purchase. And my husband had to make a more concentrated effort to not have a $3 purchase every day (mostly on Starbucks or eating out).

It really was a process to find a balance.

While we were in debt, it was so hard for us to see the light at the end of the tunnel. We were paying off debt, but we would also have a lot of setbacks, like unexpected car repairs or hospital bills. Each setback would drive me crazy.

But somehow—we got through it, and we still managed to pay off our debt a whole year earlier than expected.

I can’t stress enough that you focus on the future and know that paying off debt won’t be forever. It is a temporary hindrance.

2014 is the first year that my husband and I are saving up for our future rather than paying for our past—and it is the best feeling in the world.

Know that you will get through this difficult period too.