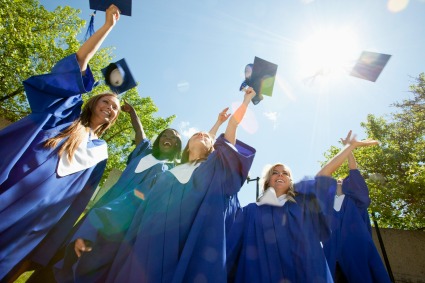 David Fagan, a marketing executive with eight children, has decided that he’s not going to pay for his children’s college education.

Fagan argues that he doesn’t think a college degree is still worth the $200,000 estimated or so costs at a private institution, and he would rather encourage his children work their way through school and pay for the degree themselves.

In fact, Fagan claims, he would rather his children follow entrepreneurial spirits and start a business than go to college.

Fagan’s mentality is one that many parents share these days. The costs of college have increased at a frighteningly exponential rate that is making a college degree out of reach for many middle-class families.

Lots of students do get help with their college education through grants, but more and more, the middle class is finding they simply don’t qualify and their only option is student loans.

The Gen Y Generation has felt the crushing blow that student loans provide. In fact, 71% of college seniors that graduated in 2014 had an average of $33,000 per borrower, with debt increasing 6% each year.

A 6% increase is greater than the rate of inflation and simply unsustainable. At this rate, Gen Yers having kids now will need more than $200k to put a child through school.

Is it Worth it to Get Your College Degree?

And yet, despite the cost of education increasing at an alarming rate, most still agree that a college degree is an absolute necessity. A college degree can frankly be considered the high school diploma of the last generation.

The stats are hard to argue with that college graduates:

But will these benefits last forever? And what’s the point of earning more if you’re just using it to pay off loans?

In order to ensure that you won’t be riddled with a degree you can’t use and loans that stifle any disposable income, there are some questions you need to consider.

Will your degree help your career?

College has often been billed as a time of exploration, but it’s getting pretty expensive to just goof around. Pick a degree that you enjoy but also has earning potential.

Going to community school will save you thousands for your first two years, but you can still graduate from a more prestigious university by transferring. The only trick is to go to school year-round to ensure you don’t end up having to stay in community college for more than two years, as getting your classes is often one of the biggest hurdles.

It seems that college is the last time in your life where you’ll get to enjoy living a bill-free life, but the reality is those loans will be a burden when you graduate and earn an entry-level salary. Many kids work their way through school to pay for their bills, but consider getting a head start on your student loans.