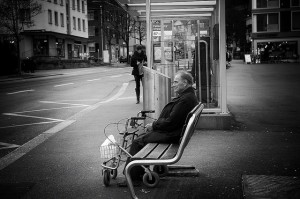 Joining your employer’s retirement program used to be enough to provide for a sufficient retirement but a new study by the Employee Benefit Research Institute showed that nearly 40% of employees have less than $10,000 saved in their 401(k) with the median amount saved being only $18,433.

Of course, older workers do tend to have more saved up.

At Vanguard, for example, the median for savers aged 55 to 64 in 2013 was $76,381. But even at that level, millions of workers nearing retirement are on track to leave the workforce with savings that do not even approach what they will need for health care, let alone daily living.

“In America, when we had disability and defined benefit plans, you actually had an equality of retirement period. Now the rich can retire and workers have to work until they die,” said Teresa Ghilarducci, a labor economist at the New School for Social Research who has proposed eliminating the tax breaks for 401(k)s and using the money saved to create government-run retirement plans.

Find out more about the shortfalls of relying on a 401(k) program at USAToday.