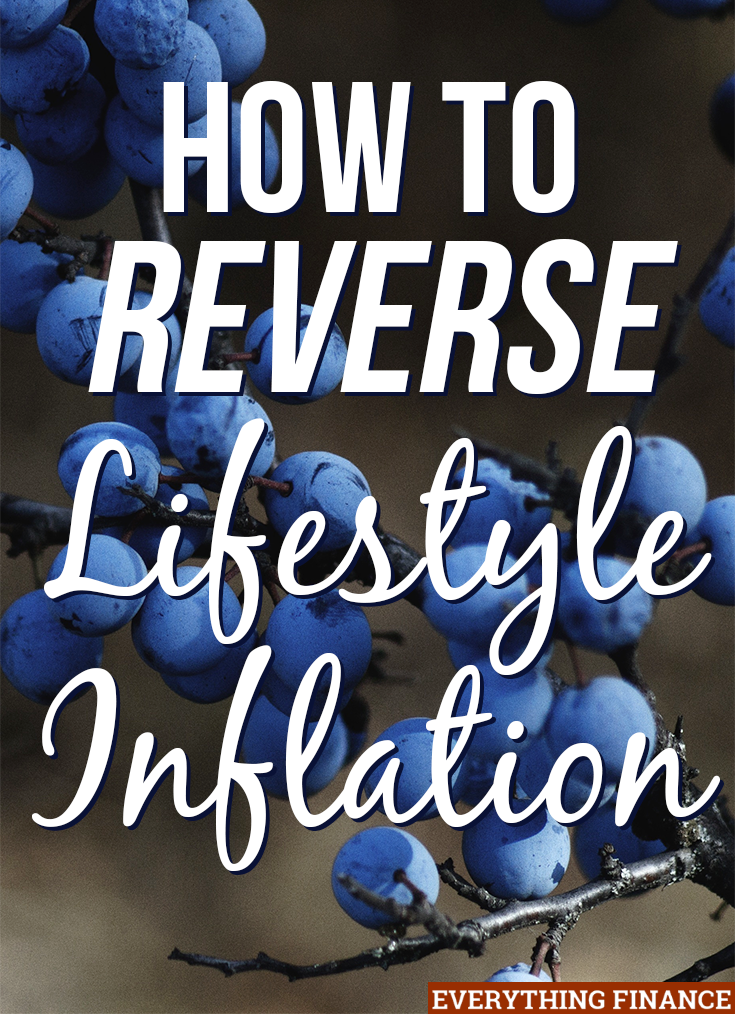 In the past few years or so, my husband and I have really been buckling down on our finances. We grew sick of blowing so much money on things that only left us with a smaller wallet, and it was frustrating that we had nothing to show for the money we had made.

Naturally, things changed after we had our daughter four years ago. We had some new, big financial goals that we wanted to reach, and once we had a common goal, we were unstoppable. It feels good to be part of a team with a common goal, even if it took us a while to get there.

We knew we needed to make some changes in our life sooner rather than later, so we did. If our situation sounds similar to yours, here’s how you can reverse lifestyle inflation.

Once we got it into our heads that car loans weren’t for us, we paid those off as quickly as possible. Luckily, we had already gotten out of the habit of purchasing brand new cars, so we didn’t have huge car loans. However, we still owed some cash on our used cars.

We both realized that it really doesn’t matter what we are driving as long as it’s something that can get us there and back safely. We wanted something we could drive until the wheels fell off so we could get max value out of it. We now own 2 paid-off Toyotas with over 100,000 miles on them that are still going strong.

It’s not that paying off the cars reduced our lifestyle so much as it got us used to the idea of having economical cars. Everyone around us drove new cars and a neighbor even told me my Camry was a “grandma car.” (I held my tongue instead of asking her when she would finally have her new car paid off.) 😉

Has lifestyle inflation gotten the best of you? Here's what to do to reverse it! Click To Tweet

How Much Is That Beater In The Window?

Now that we own our cars free and clear, I now look at “beater cars” in a whole new way. It may look bad on the outside, but the person driving it could be a hardcore investor with a million sitting in the bank. That driver may be very good with their money, to the point where they’d rather have their money invested in stocks than in their car. You never know!

Once we swore off car loans, we didn’t want any other kind of debt. We sold our boat for what we owed on it, and never looked back. Our goal was to get any and all debt paid off, and the next goal was our mortgage, which we began chipping away at immediately.

Cut the Cord And Get Your Money (and Time) Back

I had always read about how we should cut our cable TV subscription, but for whatever reason, I couldn’t do it. I thought I would miss my Bravo and E! too much and my husband would completely freak if we didn’t have access to his college football.

But then I started to get angry when I would think about how we were double paying for TV. What I mean by that is not only were we paying $100+ per month for the “pleasure” of watching TV, but we also had to sit through endless commercials during every single show we watched. Isn’t that like paying twice for cable? It was enough to get me out of the cable TV madness.

We’ve been cable-free for 2 months now, and I don’t miss it. Consequently, I now have more time to devote to my side hustle, freelance writing, so that I can earn more money. Not too shabby!

I’ve always had bad skin, and I’ve always wanted to be blonder than I actually am. This meant that I constantly wore makeup and paid over $125 per session for salon highlights. My skin got worse and worse and my hair got blonder and blonder until I was almost platinum.

Because I don’t necessarily want to have the same shade of hair as a Playboy bunny, and because it was way too expensive, I stopped getting my hair highlighted. In time, I also ditched makeup completely, even at work, which was a huge step for me.

As a result, my hair is healthier, my skin is better, and my wallet is thicker because of it. I like the fact that I’m comfortable enough in my own skin to walk around with my completely natural look. It is me, after all. It’s the way I was made, and it’s freeing to be out from under all that makeup and all that pressure.

If you haven’t tried this yet, you need to. It does get easier the longer you do it. Today, anytime I step into a salon and smell those chemicals, I get a headache, and wearing makeup for a special event makes my skin break out immediately. Clearly the stuff is bad for you.

I also decided that with a closet full of clothing, I had absolutely no need to buy any more clothing. No need! Most of the stuff I wound up buying was cheap, flimsy, and not very flattering. I kept all my best, quality pieces and got rid of the rest. Now I only need to shop for underwear on occasion, and I’m set. I have no reason to step foot inside a mall. Ever.

One of the hardest things to get used to was getting rid of our restaurant tabs. We, like so many others, loved to go out to a restaurant so we didn’t have to worry about what we were cooking for dinner. At the end, you have nothing to show for it but a smaller wallet and a fatter waistline.

I began to make it a point to make regular, weekly trips to the grocery store so that we would cook more meals at home. I never make dinners that take longer than 30 minutes to cook, so I’m rarely too tired to cook dinner. I also don’t mind spending more at the grocery store (even if I’m buying steak), because eating at home is typically always cheaper than going out.

Reducing our restaurant meals helped tremendously in our budget. We still go out, but we always limit it to planned meals on the weekends and special occasions, no last-minute trips allowed.

I’ll admit, it wasn’t fun at first, but now I can’t imagine anything different. We’ve gone from eating so many meals out to creating so many delicious meals together at home, not to mention we’re healthier because of it.

The biggest (and best) decision we made to cure our lifestyle inflation was to downsize our home. Our old home wasn’t terribly big at 1,900 square feet, but it was still way too big for our needs. We moved into a much smaller, much cheaper home that was more appropriate for our needs.

Downsizing not only decreased our need for household goods (less house equals less space to store stuff), but it also decreased our mortgage payment, taxes, insurance, and utility bills. It saved us so much money that we were able to pay off that mortgage in a few years’ time.

Trying to reverse your lifestyle inflation isn’t always easy, but I try to remind myself that I was once able to live as a broke college student, and I remember being so happy back then. When I think back on that time, I don’t remember missing out on anything or feeling poor. It was actually the time of my life. I had little money, but I had big fun.

It just goes to show that you don’t have to earn a huge income to live well. You just have to figure out what’s important to you, and allocate your money to those areas. In the end, it is so worth it.

Have you cut back on certain areas in your life? What would you not be able to cut back on?