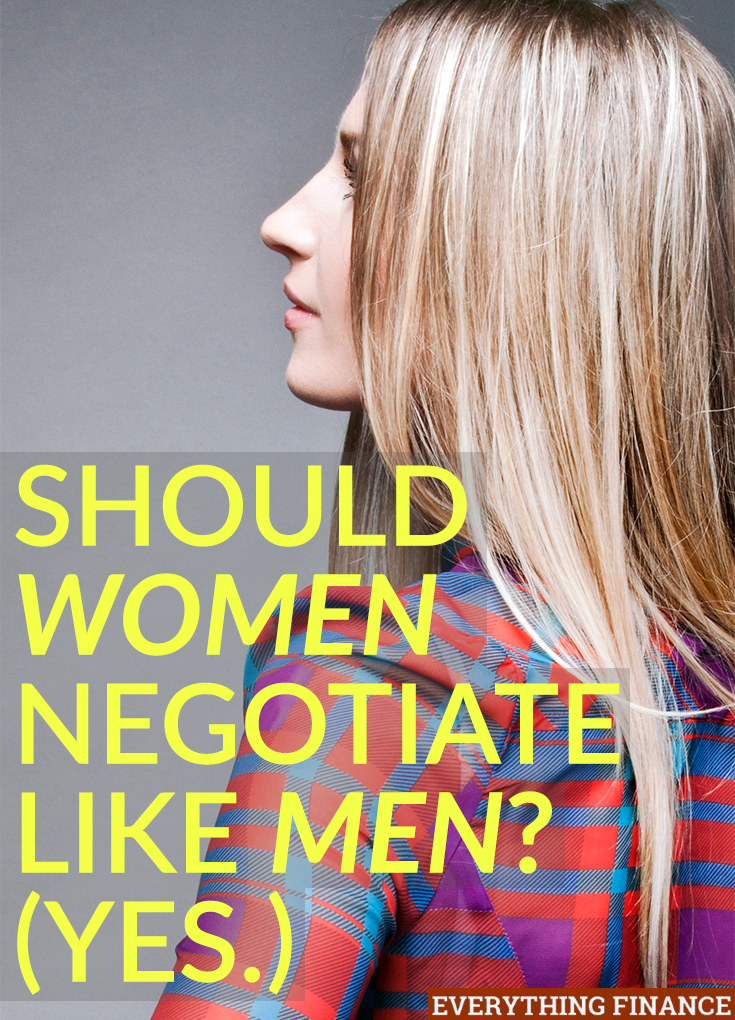 Every few years, the American public unofficially crowns a new sweetheart. For years, it was Julia Roberts, and now Jennifer Lawrence wears that adorable crown.

When the 2014 Sony hack revealed that she and Amy Adams made significantly less than their American Hustle male costars, I felt bad for her. I assumed the fault was Sony’s, and I assumed Jennifer and her team had negotiated a fair deal. Sony knew what all the actors were being paid, and I thought they should have paid their stars more fairly.

But Jennifer Lawrence recently wrote a letter where she said she didn’t get angry at Sony – she got angry at herself.

Why? Partially because she didn’t negotiate like a man, as that would have made her less likeable. She said she’s done with that; she wants to be paid fairly.

I checked Facebook to find a slew of women saying “amen”. They agreed they couldn’t negotiate like a man because it wouldn’t be acceptable to the men who were leading the counter-negotiations. However, none of them offered any concrete examples of tough salary negotiations that had gone wrong.

That’s because it’s mostly a bunch of baloney. I should know.

A Woman’s View: Working in a Male-Dominated Industry

In my 10-year career, very few of my raises had much to do with me at all. Instead, I had a few male managers who went to bat for me, with no prompting on my part.

Here’s my story of how I went from a less-than-confident girl to a woman who negotiates like a man.

In case you haven’t read my bio, I’m a female aerospace engineer (I jokingly refer to myself as a “rocket scientist”). I work in a male-dominated industry. I have never had a female boss. I frequently sit in meetings and trainings where I’m the only woman. (It’s kinda nice to have your own bathroom because you’re the only woman in the building.)

When I graduated from college, all I knew was that I wanted to work in NASA’s Mission Control. I graduated not too long after the Columbia accident, which had caused a large pause in the space shuttle program. Mission controller spots were scarce.

I interviewed for a number of other jobs, but couldn’t find a good fit. Then an Air Force Base near my hometown called me in for an interview.

I was there to interview for a design engineer spot (design engineers were the low-man on the totem pole). After a quick interview, the male hiring manager asked me to wait while he made some calls. He said “people need to talk to you”.

He didn’t see me as a good fit for a design spot; he thought I needed to lead teams. He lined up three project engineering interviews for that day. I was offered all three spots.

In the days before the internet had become a bona fide research tool, I didn’t have anywhere to turn for salary research. I had completed a recent internship in an expensive area, so I decided to use that yearly figure as a basis for this rural job.

When I was asked how much I expected to be paid, that was the figure I gave. And I don’t mind admitting that my voice quavered.

The manager responded to my low-ball amount by saying, “We pride ourselves in offering a fair, nationally competitive salary”. He then offered me 50% more than I had asked. Of course I took it.

Once I was in my job, I quickly proved my potential. Everyone in the division wanted me on their project. One day, my manager pulled me aside and reminded me that I had to be there a full year before I could qualify for a raise or a promotion.

I thought it was odd that he’d bring this up, but before I could respond, he told me how he got an exception for me. He taken my case all the way up to the general manager, securing me a promotion and a sizable raise.

Two years later, NASA was hiring mission controllers again. I landed a job, but I had to take a pay cut because the position was entry-level. Since this was my dream job, I leapt at the chance.

Being a mission controller is not exactly a high-paying job, but as my bosses could give me raises and promotions, I got them. I never asked, never lobbied. They were always handed to me as a reward for a job well done.

Though I loved my job with NASA, my husband needed something different. He took a job out of the area. “Rocket scientist” jobs in our new state were hard to come by, so when I got a project management offer, I took it. We moved for my husband’s job, not mine, so I paid no attention to the large pay cut I took.

A year later, at my performance review, my manager offered me a promotion. He apologized that our company didn’t have money for a raise, but he’d been able to negotiate a small bonus in hopes that I’d get the raise next year.

When the next performance evaluation came along, I had a new boss and I made sure he knew the situation. When I went in for my performance evaluation, I expected a bit of a battle because our company was not known for great pay. I had data from glassdoor.com and payscale.com that proved that I was underpaid for the job title. The research had targeted similar company sizes and nearby areas.

When I made my case, my supervisor asked me how much money I wanted. I quoted a number that equated to a 12% raise. He asked if I was sure. I was cool as a cucumber. I was sure. I knew I had done a great job. I knew he was happy with my work. I knew the data backed me up.

He filled out the pay raise form immediately and signed it. And then he told me to keep up the good work and he’d see to it that I got another raise next year.

Before my next performance evaluation, I had moved on to another position. This time, when I was asked what my ideal salary was, I gave myself more than a 50% raise. I got it. No negotiation necessary.

I’ve taken a few pay cuts in my career, but they were always something that made sense for my given situation. However, I never stayed at a job that was incapable of paying me fairly. I was also never “friends” with my bosses. All my raises were given based on performance.

If you take away nothing else from my career, take away these three lessons:

However, just doing your job isn’t enough. You need to do it really, really well. “Doing your job well” means different things in different fields, but in general, you need to work efficiently and effectively. Accomplish large amounts of quality work in a short amount of time.

Show drive and enthusiasm, and be proactive. Your boss will come to believe they can’t live without you. They’ll be forced to decide whether they give you a raise or whether you walk out the door for greener pastures.

Look at my example – a good boss is thinking about that before you even ask.

Want to excel in your #career, especially as a woman? Take these three lessons to heart: Click To Tweet

Get Over Being Liked

One point where Jennifer and I totally agree is “stop trying to be liked”. You don’t need to be liked to do your job. Just do your job (see the point above).

If you haven’t done any research on fair pay, you’ll never be able to ask for a fair salary. You won’t know what it is!

Research, research, research. Research your company and job title on Glassdoor’s salary tool. Use Payscale to analyze your industry and jobs in your location. Use Google. Ask coworkers if you think you can get an honest answer. Ask on anonymous forums. Get as much data as possible. Know your number.

If you’re going to negotiate with a new employer, provide your number confidently. Don’t say “I’m kinda thinking maybe…” You’re inability to negotiate confidently could be more of a turn off than the number you quote. It’s also a sign you’re willing to take less.

Don’t be crushed if the company decides to negotiate with you. Stay confident and only accept an amount that makes you happy. If they walk away, then chances are good you didn’t want to work for them anyway. Either they underpay everyone or they only underpay women. Neither is a good situation.

If you’re negotiating for a raise at your present employer, not only should you be prepared with the salary data, but you should also be prepared with a list of your accomplishments. Practice the discussion many times so you can sound cool and confident. If you’re told no, you need to ask yourself if you want to continue working for this company.

Women, stop playing the victim with your salary. Go out and earn that salary. Work hard and show how important you are to the business, then ask for what you deserve. If you still don’t get it, go somewhere else. It’s that simple.