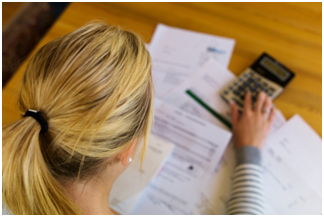 Whether you’re finally ready to go back to school to become a nurse or you’re looking into what it will take to go into business for yourself, you need to have a solid financial plan in place so you’re more likely to succeed than fail. One of the most important features of such a plan should be freeing yourself up from costly debt.

Nothing can derail plans that cost money as fast as already being stressed out about money when you take the second career plunge. From creating a realistic budget to transferring credit card debt, here are five tips that will get you out of debt faster, so you can start the next phase of your life sooner.

The average household in the United States with credit card debt is carrying over $16,000 of it. Since most cards have unreasonably high interest rates, this type of debt threatens to hamstring anyone who wants to transition into a different career. Start with transferring your credit card debt onto cards with 0 percent annual fees and lower interest rates than the ones that currently hold your debt. While you will have to pay a fee on the transfer, the lowered rate will help you establish a payment plan that can actually start to cut into the debt, instead of just paying toward the interest. Be sure to read the fine print of any card you choose, however, as some will increase interest rates after a certain amount of time has passed.

According to recent Freedom Debt Relief reviews, too few people in debt have a realistic budget, and if you’re one of them, it’s time to make one. What makes a budget “realistic”? Well, for starters, it takes into account the real amount of money you make and the real amount of money you have to spend to live each month. Start with your income, and, then, make a list of the expenses that are non-negotiable. Non-negotiable expenses include your mortgage or rent, truly basic utilities like water and electricity (not cable), car and health insurance, gas or subway fare to get to and from work, groceries, and your minimum debt payments.

From there, apply more money than you usually do toward debt, but, in order to keep things realistic, start small. Rome wasn’t built in a day, and the budget you’re trying to set shouldn’t require too drastic change of lifestyle — at least initially. Go too hard on yourself, and you might give up sticking to a budget altogether. As you adapt to keeping a budget, you can start to tighten the screws to pay down your debt more quickly.

While it’s true that not all debt is create equal, it’s also true that not everyone can think about their debt in exactly the same way. Because of these realities, organizing your debt is helpful. Know everything about the debts you owe from interest rates to overall amount. Some people will fare best tackling high-interest debt first, but some won’t. Especially if you feel overwhelmed by the debt you owe, paying off small debts first — even if they aren’t costing you as much in terms of interest — can be a boon to your confidence.

No one wants to work a second job, but if you’re serious about starting out on a new career path, and you’re swimming in debt, it may be a good decision. Whether you take on freelance work as a graphic designer or wait tables on the weekend, be sure to put all the money you earn from your second job toward your debt. It can be a tough row to hoe, but you’ll pay down debt faster if you have more money to put toward it, and it won’t have to last forever.

5. Entertain Yourself for Free

Few people take advantage of the many types of free entertainment readily available both at home and in their surrounding neighborhoods and towns. From putting puzzles together and playing board games to taking advantage of free concerts, movies, and the like that are available in your town, once you commit to free entertainment instead of the kind you pay for, you’ll be amazed at what’s available.

Play tag in your local park. Check out books, DVDs, and CDs from your local library. Put on a family play. Learn to play every version of euchre there is. Before there was Netflix, cable, and eating out five days a week, people entertained themselves just fine. To get out of debt faster, flex your creativity muscles, and put the money you’re saving on entertainment toward your debt.

Get out of debt faster with these five tips, so you can start your path toward a new career without the excess stress and impeded cash flow of being in the red.