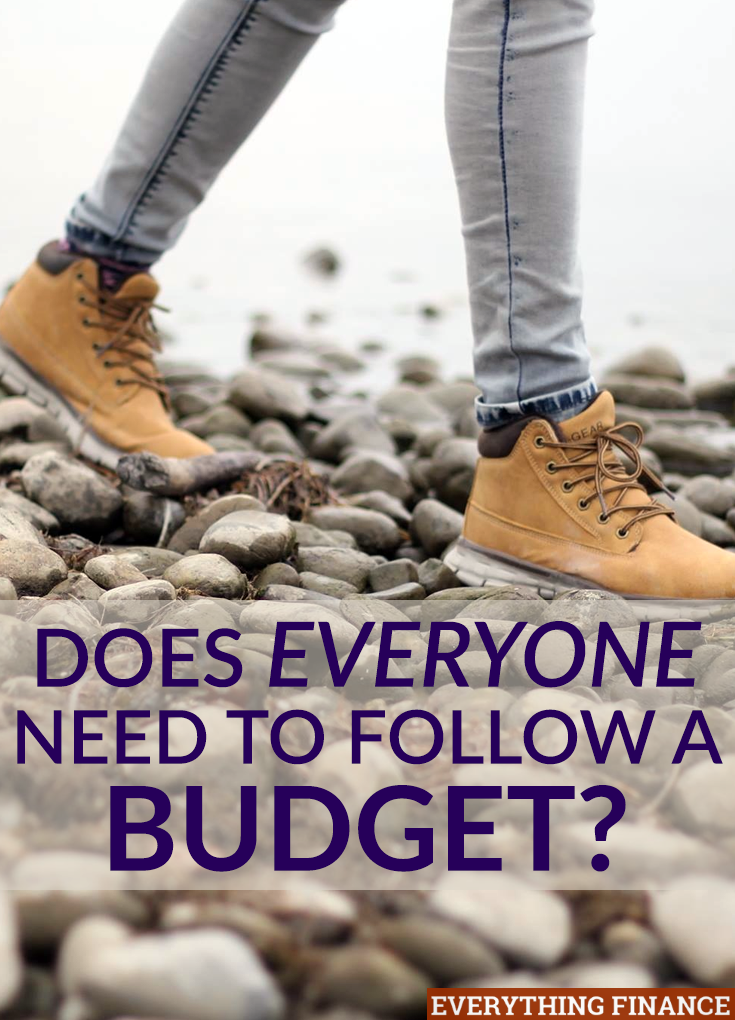 The idea of budgeting often gets a bad rap.

Some people think that keeping a budget means that you don’t have a lot of money or that you can’t buy what you want (not true on both accounts).

Some people think that as long as you aren’t spending more than you make, you don’t even need a budget.

Whatever camp you fall into, the decision of whether or not to budget is a personal one.

Sometimes friends will ask me what they need to do to get their finances under control, and I used to automatically say, “Start a budget,” even though I myself did not have one. (Yes, I am a personal finance writer, and I do not have a budget. I”ll explain why in a moment.)

Although I don’t follow a budget, I do believe that I’m financially secure and good with my money. I’m completely debt free, I’m frugal at heart, and I was financially able to quit my desk job to pursue a freelancing career.

I may not have done everything right, but I must have been doing something right to get to this point.

After I realized I was giving out advice that I didn’t follow myself, I decided to change my stride. Does everyone need to follow a budget? I think the answer is different for everyone.

Figure Out What Works for You

When I decided it was time to take control of my money, I sat down and googled “how to start a budget.” I was ready to do whatever it took to get our finances on track.

I read a few posts about different budgeting ideas, took some notes, and then ran to tell my husband all the good news I had just learned about budgeting.

Unfortunately, however, I would soon discover that, to my husband, the word “budget” may as well be a four letter word. He didn’t exactly take to it like I had hoped, and he had no desire to jump in head-first with me.

My husband came from a family where money was spent freely and without a second thought, and he inherited many of those money traits. I thought we were done for.

But I kept at it. Later, when I suggested nixing the traditional budgeting ideas and, instead, simply tracking our expenses for a month, he was completely on board.

He was so on board with it that he went out and purchased two tiny notebooks for us to keep separately to record our transactions for each day. I was surprised.

After he dutifully recorded each and every transaction for the next 30 days, it was like a light bulb went on in his head. It took the practice of writing it all down before he realized how much he was spending on bar tabs, cigarettes, and a silly gaming habit he had picked up along the way. He was blowing a few hundred each month on stuff that didn’t really bring him any happiness.

After that game changer, he dropped a few of his bad habits and started getting serious about our money. He started scrimping and saving in other areas, second-guessing every purchase he made, and, as they say, the rest is history.

Did it take a traditional budget to get him to clean up his ways? No, but it did take an honest look at our expenditures to make some big financial changes in our lives.

The key for him was tracking his expenses, and I think that’s something that needs to happen in every household whether you follow a traditional budget or not.

You need to know where your money is going, and you need to be honest with yourself about where you’re spending your money. Do your expenses line up with your values and what’s important to you? If not, it’s time to make some adjustments.

Even though we don’t follow a traditional budget, making a small change like tracking our spending brought about some more radical changes that naturally fell into place once we began to align our spending with our goals.

The small task of tracking our money for one month actually lead to us paying off our mortgage to become completely debt free, increasing the contributions to our retirement accounts, and committing to saving at least 50% of our take home pay each month. What a big difference such a simple change made!

As for how we allocate our money for savings, we keep it simple by using two separate accounts. Every time we’re paid, half goes into a checking account for our monthly expenditures, and the other half goes into our savings account for us to either save or invest.

We have yet to have a month where we’ve had to pull money from our savings to pay a bill (knock on wood), but if that does happen in the future (and it might), then that’s okay. The money’s there for us to use if we need it, and if we don’t need it in the near future, it’s there for us to invest and enjoy the benefits of compound interest.

You can implement that simple method, too, if you don’t want to keep a traditional budget. You don’t have to start at 50% — we sure didn’t! Start out smaller if you need to, and allocate 90% of your earnings to your checking account and 10% to savings.

The numbers don’t matter as long as you’re saving something. Over time, as you pay off debt, whittle down expenses, and earn more, you can adjust your savings goals as needed.

It Doesn’t Have to Be Complicated

Budgeting can be an intimidating task if it’s one you’ve never faced before, but it doesn’t have to be. You simply have to find the trick that works for you and your family.

If a traditional budget doesn’t work for you, track your spending instead. If the thought of writing down every expense sounds too tedious for you, sign up for a service like Mint, or commit to using only your debit card for a month and check your bank statement at the end of the 30 day period.

Whether you choose to budget or simply track your spending, it’s not rocket science, and it doesn’t need to be difficult.

Be Honest With Yourself

It’s very important to be honest with yourself about how you spend money and if keeping a budget is necessary for you or not. Keeping a budget isn’t a bad thing and it doesn’t mean you’re bad with money. It actually means the opposite!

The most financially savvy people keep a budget and/or track their spending, and they can tell you where every dime they spend goes.

If keeping a line-item budget means that you’ll save more for your goals so that every dime is answered for, then by all means budget.

On the flip side, if you have a good handle on controlling your money and you find budgets restrictive, then simply track your spending. Think of it as “budget-lite.” Whichever decision you make, it’s bound to be a great step for your finances.

Do you use a traditional budget? Do you track your expenses? Do you think budgeting is important?