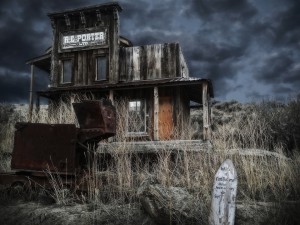 For $250,000 a six-acre haunted town can be purchased by anyone interested.

Swett,is 123 miles from Rapid City and close to the Nebraska border. The “ghost town” comes with a home, which is rumored to be haunted; a garage/shop and a bar — the Swett Tavern — which has a stage and party room, according to the listing. Swett used to have its own post office until it closed in 1945.