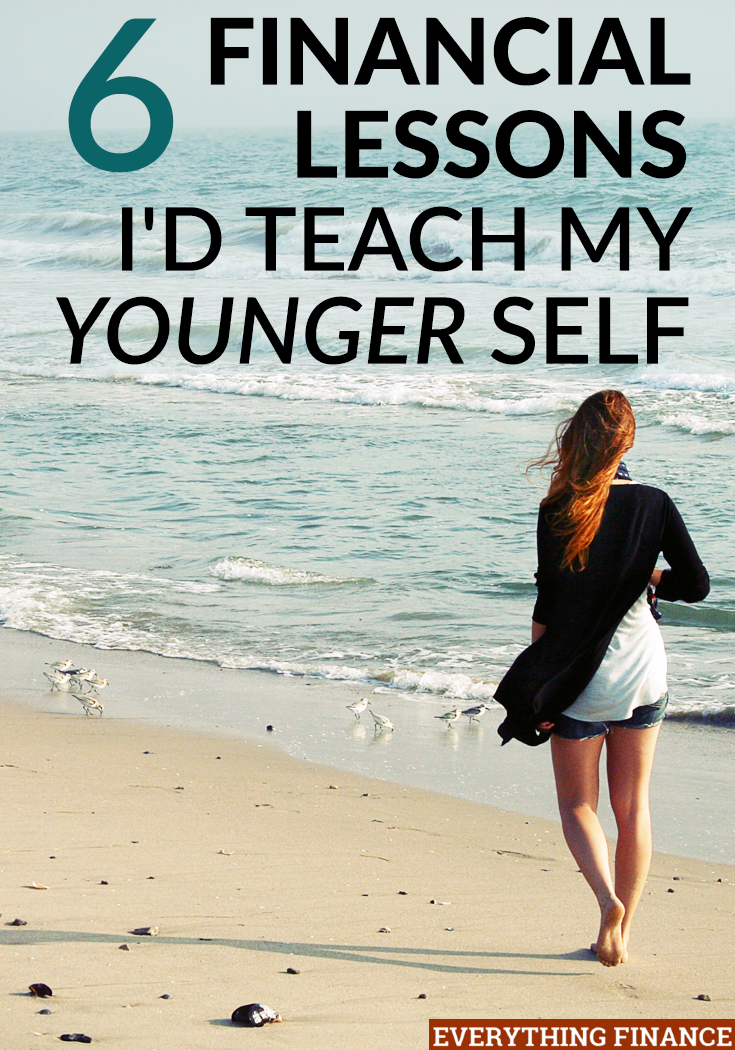 As I sit here today, I’m 31-years-old, not quite ten years out of college, and I can already think of so many things I would like to go back and change about past financial decisions I’ve made, particularly when I was in my early 20s.

I know I can’t be the only one who feels this way.

Wouldn’t it be nice if we could go back and tell our younger selves what to do, what decisions to make, who to date, and how to spend our money?

(Actually, now that I’m thinking about it, if my 31-year-old self could actually go back in time to speak to my 21-year-old self, would I even listen to my own advice? Probably not, because I was a silly 21-year-old, but that’s not the point.)

We all do things we regret, and we know that hindsight is 20/20. But if I could go back in time, here are the 6 financial lessons I’d teach my younger self.

1. Do Everything You Can to Keep That Scholarship

When I started college, I had a sizable scholarship to attend my chosen school. I really had no idea what I wanted to study at the time, so I focused on getting the basics out of the way, such as math and science, hoping that it would be smooth sailing for me after that.

Unfortunately, I am terrible at both of those subjects (I got an English degree for a reason), and I barely squeaked by in those classes, which resulted in a GPA that was a tenth of a degree too low to keep my biggest scholarship. A tenth of a degree!

Sadly, I lost my scholarship after my first year of college, and I still had three more years to go. Fortunately, I went to an affordable state school. My parents ponied up several thousands of dollars so I could continue attending, which kept me out of student loan debt, but I still regret that to this day.

I hate to think about how much money I cost my parents at that time when I could have probably studied a little more to ace those freshman-level tests.

Although I lost all that free scholarship money, I was smart enough to make the decision to work my way through college. My parents helped me out by paying for most of my tuition and housing costs (which was a huge blessing), but they didn’t give me money for much else unless it was something I really needed (like food).

So I worked throughout college, but most of my jobs were student jobs on campus or seasonal jobs I could take on holidays for a month, all of which paid minimum wage. I wasn’t exactly rolling in the dough, but every little bit helped.

The summer after my freshman year in college, however, I worked at a local factory as a temp for $10 an hour, insulating industrial-sized air conditioners.

I worked hard for every dime I made, ending each day covered head to toe in itchy insulation and bits of industrial-strength hot glue. At the end of the summer, I had earned $5,000, which was more money than I had ever made in my life, and I felt rich.

Instead of squirreling it away so I could pay for something smart like food or gas during my upcoming year in college, I ended up blowing most of my hard-earned money that summer (because you never think it’s going to end, even though I knew that I was only a temp).

I only had $500 left to start my sophomore year in college. #LifeFail

I got my first job after college, but it didn’t offer a 401k or any decent benefits, and since I was only 22 at the time, retirement seemed like a far-off place that I’d never reach.

Much like my childhood fantasy of becoming the 6th Spice Girl, retirement may as well have been a far-reaching fantasy rather than something I’d actually have to work towards someday if I actually wanted to achieve it.

Rather than acting like an adult and figuring out how to open my first IRA on my own so I could squeeze in a few extra bucks a month, I sat there and did nothing like so many other 22-year-olds who are fresh out of college, spending every cent that I earned (and sometimes more).

Hindsight is 20/20 - learn from the #mistakes of others so you can avoid costly financial decisions! Click To Tweet

4. You Don’t Need a Car That Comes With a Payment

After I landed that new (low-paying) job, I convinced myself that instead of funding a retirement plan, I needed a new car, even though the one I had was paid for and running perfectly fine. I traded up for a new (to me) car, but one that I still couldn’t afford, so I got my very first (and last) car loan.

I enjoyed the car for the first month, and then the newness factor quickly wore off. I realized that I didn’t look any cooler in a new car, and I had a monthly payment to go along with it.

That was a good monthly reminder of exactly how uncool I was after I made the decision to go into debt for a new car.

You would think I would’ve learned from the whole car payment fiasco, but in my early 20s, it was going to take me a little longer.

A couple of years after the car incident, I financed a 30-foot cruiser in order to keep up with some new friends I’d made.

On top of the $600+ per month boat payment, I had insurance, a wet slip fee, and gas to pay for as well. I was paying more for that boat than I was for my rent at the time.

I cringe today when I think about it, and I was lucky that I was able to sell the boat six months later for exactly what I owed on it.

6. Continue to Have Fun (Without Spending Money)

I may have made plenty of financial mistakes in my younger years, but I did manage to have plenty of fun on the cheap as well. I don’t remember my collegiate and post-collegiate years as not being fun or as being completely broke (even though I was).

Instead, I had tons of fun roaming local parks, nature trails, and free student events, with a few half-price wine nights in the mix.