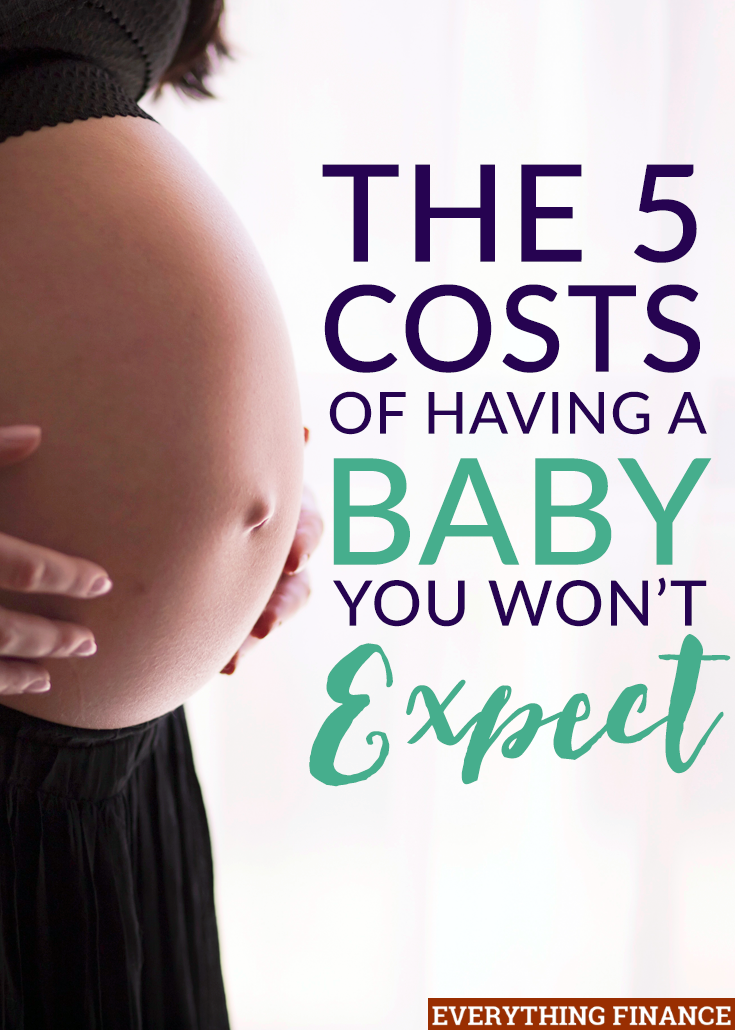 It’s no secret that American pregnancy and births are the costliest in the world.

In fact, “the cumulative costs of approximately four million annual births is well over $50 billion.”

Many American women, who are either not insured for maternity care or are underinsured, go into their pregnancies stressed and fearful about the costs of their prenatal and antenatal care, and can’t fathom the rationale behind the staggering number on that final hospital bill.

Not only do pregnant women face paying a bill for thousands of dollars for maternity care, but they also have to find a way to deal with the unexpected costs of pregnancy that have nothing to do with doctor bills.

I have two kids, and I am currently expecting our third and final child. I know first-hand just how quickly those unexpected costs of having a baby can add up.

1. Trips to the store

Starting with those unexplainably pricey home pregnancy tests, you will make more trips to the store during pregnancy than you ever imagined possible.

You may need to run to the store for saltine crackers or wedges of lime to help quell nausea, or Tums to stop the horrible heartburn. You may need to buy a heating pad to ease the pain in your hips and lower back.

Don’t forget those body-length pillows that make sleeping seem like a relative possibility when you’re nine months pregnant and feel like your baby bump is bigger than the Duomo in Florence.

All of those purchases may be little luxuries, but they make daily living much more bearable, and the costs definitely add up over time.

This pregnancy has been my hardest one by far, with nausea and pregnancy fatigue being absolutely debilitating at times. I have felt like a useless and narcoleptic couch potato.

Let me preface the next paragraph by stating that I am a huge advocate of saving money by cooking at home and using home-grown ingredients when possible. I have a garden that provides food for my family throughout the year, and I love being able to help our family save money this way. I also love being in the kitchen and creating new recipes from scratch.

That being said, food preparation of any kind, whether it’s simply slicing an apple or boiling pasta, has made me unexplainably and stomach-turningly ill. Needless to say, we have brought home a lot of take-out in the past five months, making our food budget (which usually stands at about $60-$75 per week for our family of four) reach astronomical proportions.

Why doesn’t my husband just cook instead, you ask? His work requires him to be gone for anywhere between 12 and 24 hours a day.

We have worked to absorb our higher food bill by being frugal in other areas of our budget, but spending $50 or more per week on take-out is definitely an unexpected cost of pregnancy.

Are you #pregnant or trying to become pregnant? Watch out for these 5 unexpected costs! Click To Tweet

When you’re expecting, it’s no secret that you’re going to get bigger around the waistline. But did you know that a lot of women have to replace their entire wardrobe during pregnancy?

Yes, even down to their shoes. One of those strange, costly, and not often talked about side effects of pregnancy is the fact that your feet may go up in shoe size.

Mine did, and I may have cried a little when I realized that my feet would never again fit into my prized collection of pre-pregnancy shoes. Another thing that I had to spend a lot on was baby boy clothes for little one.

Replacing my footwear wasn’t something that was even on my radar when we budgeted for our first baby. So, I’m letting new moms know now:  you may have to replace all of your shoes.

Lost wages start long before your baby is born. Moms-to-be everywhere experience the “Mommy Tax” when they have to take time off of work for lengthy tests and procedures, sick days, and just simple office visits.

The mommy tax continues after the baby is born as well, with many women wanting to stay home with their infant for at least six weeks. With no maternity leave mandate in our country, most moms are forced to rely on their personal leave time or simply take unpaid leave while taking care of their newborn.

Most women lose thousands of dollars a year in lost wages when they become mothers. I am so grateful that I have been able to provide for my family by working from home, and I won’t need to take maternity leave per se, but I, too, have had to deal with lost wages.

Pregnancy takes a toll, physically, mentally, and emotionally, and I have had to decrease my workload to keep up with my kids and this pregnancy.

Whether you have insurance or not, you never know what kinds of doctor bills you’ll have to contend with until after you’re in the thick of it. From unforeseen medical problems, needing a surgical delivery, or your child needing to be in the NICU, your prenatal care and hospital bills could be thousands more than expected.

When budgeting for your pregnancy and delivery, make sure to have a backup budget plan for how to take care of bills that you just weren’t expecting.

Try to prepare for the unexpected costs of pregnancy

If you’re budgeting for a baby, always set aside more than you think you’ll need to cover the unexpected costs of pregnancy.

Each pregnancy is unique, and your needs will be different than mine, but it’s better to be over-prepared financially than left struggling to make ends meet, unable to pay those maternity bills, or not have enough in your bank account to cover incidentals.

Did you have any unexpected costs related to pregnancy? How did you prepare financially for having a child?