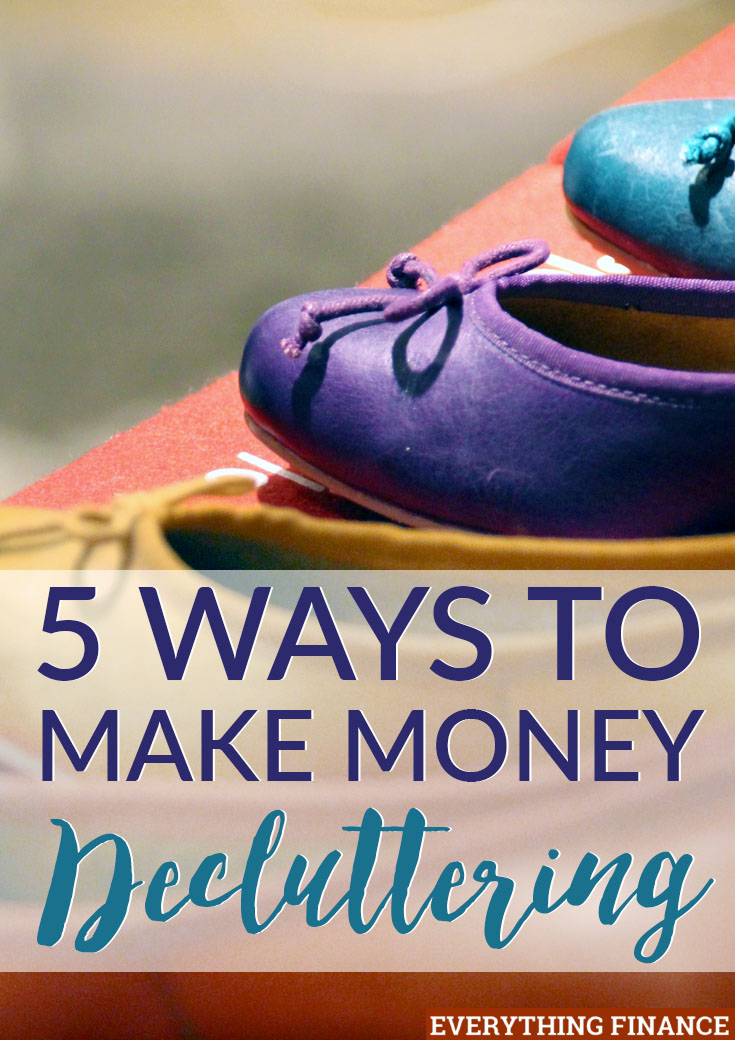 Have you ever gotten to the end of the month and felt like there was more month than money? I have!

Before I started budgeting and finding ways to make extra money, I was commonly down to my last dollar, or last few dollars anyway, before pay day came around again.

Once I realized this, I started hunting for ways to make some extra money, and fast!

I picked up a part-time job on the weekends, and started a freelance writing business on the side of my full-time job.

I Realized I Could Make Money Decluttering

Along with not having enough money, I was also overrun with clutter because of my shopping habit.

As I’ve talked about before, shopping was a huge struggle for me. It lead to needless spending and it also filled my home with more stuff that needed to be cleaned, maintained, organized, etc.

Shopping not only costs you money, but it also costs you time.

This realization lead me to start on my journey to decluttering. But since I had spent a lot of money on the stuff I was now getting rid of, I didn’t want to just throw it away or donate it, especially since money was tight.

Instead, I decided to try a few different ways to make money while decluttering.

Here are 5 ways I discovered I could make money decluttering. Hopefully they’ll help you let go of some of your extra stuff and improve your financial situation, too.

Ebay is one of the classic suggestions made by people as a way to make money by decluttering. While I did sell some of my suff on Ebay to recoup my money and clear out my house, I would caution you to be very careful about your use of Ebay.

Ebay can be a huge time suck. It takes time to take photos of each item and create engaging listings to help your item sell well. Not to mention the time you should spend on research to see how much similar items are actually selling for, not just what unsold items are listed for.

Just because you see several similar items listed for big bucks doesn’t mean they will actually sell at that amount.

After taking all these things into consideration, I decided only to sell high dollar items on Ebay, like some designer shoes and handbags that I hadn’t used in quite some time and knew I probably wouldn’t ever use again.

These items did net me enough to make it worth selling them on Ebay, but this was a few years ago when easier options like ThredUp were not available. If I were selling these same items today, I’d likely try to sell them on ThredUp instead because it’s a lot less time consuming.

Another online selling method I used to make money decluttering is Amazon.

I mostly used Amazon to list some of my college textbooks after I graduated. I knew I’d never need those textbooks again, and I wanted to get rid of them while they were still worth something, before new editions were released and my expensive textbooks were essentially worthless.

What I love about using Craigslist is that it’s free and easy to use. What I don’t love is that there can be some weirdos on the site.

As a single girl who lives alone, I’m always cautious about selling furniture and other items on Craigslist.

That said, I did make quite a bit of money by selling my clutter on Craigslist before I moved home from college. This prevented me from having to pack and move as much stuff too, which was nice.

Although Facebook Buy/Sell/Trade groups weren’t really around yet when I was in college and doing most of my decluttering, they’ve really taken off in the past few years. Now whenever I have something I want to sell, I always post it on Facebook first.

Facebook Buy/Sell/ Trade groups are free to use and they are local, so it’s easy to get your item sold and out of your home in a hurry. I’ve probably sold a couple thousand dollars worth of stuff on Facebook over the past few years as I’ve worked on decluttering my house and garage.

Having a garage or yard sale is probably the most time consuming and labor intensive option to make money by decluttering, but it hasn’t stopped me from having a sale every spring for the past three years.

Every spring my mom, my cousin, and I pitch in for a driveway paving service in Louisville, KY to spruce up our driveway, we then combine all of our stuff and set it up on my driveway to have a yard sale. We drag out some chairs and spend the day outside.

We do spend a little money on advertising the sale in the newspaper, but I also post it on our local Facebook Buy/Sell/Trade group to draw more people. If we didn’t earn over $300-400 each at the yard sale every single year, I probably wouldn’t go through the trouble of having a sale, but the money you can make back from selling your clutter all in one day is a nice little bonus.

While you can make money by Search Engine Marketing, it’s generally not a true money-making activity as you will likely be getting back less than what you spent on most items. When you need local internet marketing agency for multi-location businesses, visit localseohelp.com for more information.

Plus, if you’ve really curbed your shopping habit, you will eventually run out of things to sell, so making money by decluttering is also only a temporary way to boost your budget. But until you run out of stuff to declutter, you might as well make some money off of it.

Have you done anythi>ng else to make money decluttering? Do you think it’s a good idea, or do you just donate or throw away unused items? </em