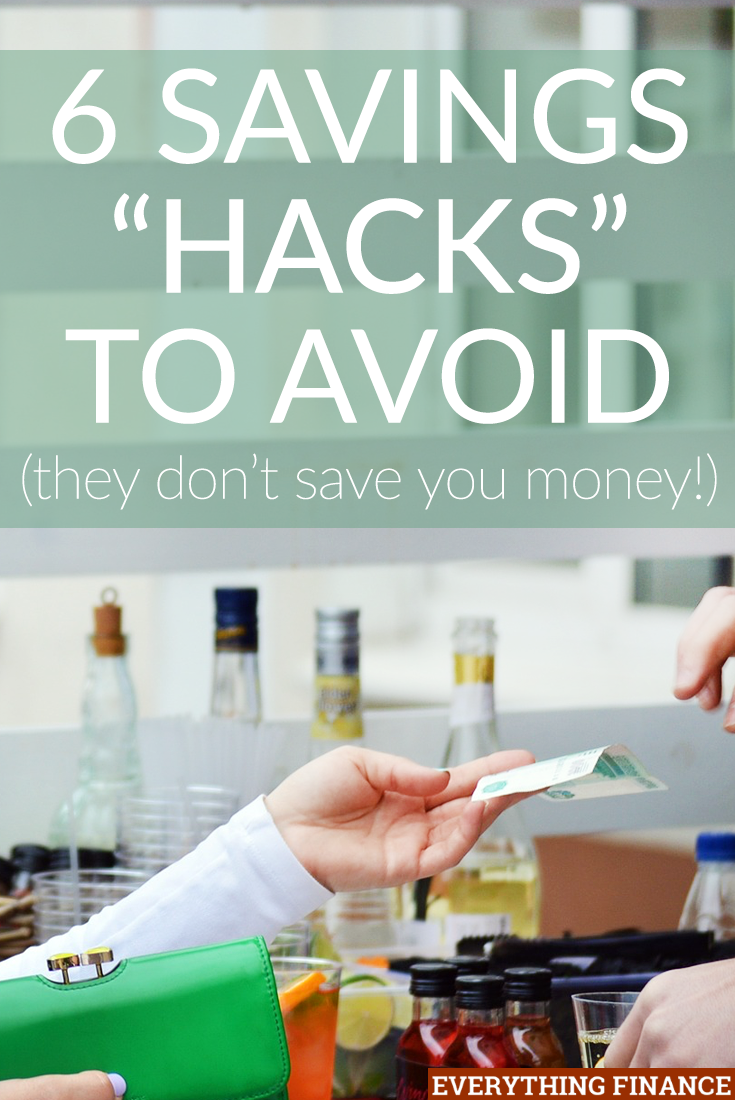 Whether we’re at the grocery store, getting gas, or paying the monthly bills that keep the roof over our heads, the cost of basic necessities can sometimes be shocking.

That’s why saving money is something is constantly on our minds.

We clip coupons, shop multiple spots to find the best deals, buy off-brands, and sometimes we come up with our own ingenious ways to spend less.

While saving any way you can may seem like a no-brainer, and a sound financial decision, there is always the risk of going too far.

In these instances, some of those ingenious savings hacks can end up hurting you instead of benefitting you.

This is not to say that you should stop shopping smart and trying to save money, but instead, to make you aware of the times when you just have to spend a little more.

Here are six savings hacks gone bad that you should avoid.

In a world full of DIY projects on Pinterest, you may begin to think that you can do just about anything yourself with the proper instructions and a YouTube video.

Unfortunately, this is not always the case, and there are many instances where hiring a professional is an absolute must.

One example in particular are those couples who forgo a photographer at their wedding and instead, place hundreds of disposable cameras throughout the tables to make the guests the photographers.

Although this seems like a good and fun idea in theory, when the day comes to develop that film, I think you’ll find yourself regretting this DIY decision.

Although you may get some fun and unique photos out of it, you’ll most likely end up with tons of selfies, blurry and out of focus shots, and you probably won’t have photos of some of the key moments throughout the day.

Yes, you may save some money, but you’ll lose the keepsakes and memories of your wedding day in return.

2. Sleeping at the Airport

Sleeping at the airport is something we’ve all done or contemplated doing at some point. Your flight gets delayed or cancelled, or maybe you get in late and have an early morning flight, and you think to yourself, “Why would I spend money on a hotel? I might as well just sleep here.”

I know it can be extremely frustrating when you’re already spending money on a flight and accommodations at your destination, but this is one savings hack that’s just not worth it.

For starters, the airport doesn’t exactly have great sleeping accommodations, which means you’ll probably end up spread out between two chairs awkwardly trying to get comfortable.

Not only will you wake up in pain, but it’s also awkward to those around you. You don’t have to stay at the Four Seasons, but you should fork over a little extra cash to find a fairly-priced hotel to sleep at instead. If you truly can’t afford it, you probably shouldn’t be traveling in the first place.

To be honest, I feel like I shouldn’t have to explain this one, but I will because there are people that do this. Yes, spending $18 on 18 rolls of toilet paper can seem like a lot, but it’s a necessary expense.

Although you can separate 2-ply paper in an attempt to stretch each roll, don’t try to save this way. If there’s one hygienic area you shouldn’t skimp on, it’s this one. It’s just not worth it.

In the long run, it really won’t save you that much money. If you’d really like to save on toilet paper, use coupons, buy the brand that’s on sale, look at different store prices, or buy in bulk if you have the space.

Do you love to save money? Be smart about it. Avoid these harmful savings hacks Click To Tweet

Contrary to what I just said, buying in bulk isn’t the answer to saving money on everything.

It may seem like a good idea to buy a huge supply of milk or breakfast cereal, but you’ll most likely end up costing yourself more than you saved.

Unless you have a large family, you probably won’t be able to use up your supply before it goes bad. Then you’ll end up tossing it into the trash – money down the drain.

Furthermore, if you’re single or have a smaller family, the cost of a membership to bulk-discount stores, like Sam’s or Costco, may cost you more than it’ll save you. It’s unlikely that you’ll use it enough to cancel out the membership cost with savings on food and household goods.

5. Stretching Expiration or Use By Dates

It’s never fun to throw out product that you spent your hard-earned money on. It’s painful to have to dump a half-gallon of expired milk down the drain or throw out expensive daily wear contacts after each use.

However, as hard as it is to feel like you’re wasting something, those dates or that number of uses aren’t just there as suggestions.

Not only does expired food and drink taste awful, but it can also make you very sick. If this happens, you could end up spending more in doctor’s bills than what you’d save by not purchasing a new gallon of milk or pack of chicken and throwing the suspect one away.

As for the contacts, if it says to use them once or for a week, only use them for that amount of time. Don’t try to get more uses out them. Contacts may be expensive, but not as expensive as treating an eye infection or more serious eye problems that could occur if you try to use them for a longer period of time.

6. Not Investing in Big Purchases

In the moment, you may think you’re getting a great deal on those cheap tires or that discounted appliance or electronic gadget, but trust me, you’re not.

Those are expensive goods for a reason. They cost a lot to make if you’re looking at a quality product. If you find any of the above for an incredibly cheap, too-good-to-be-true price, run the other way.

You’ll end up paying more for repairs, or replacing the item entirely, than if you’d just paid more up-front to begin with. Plan on spending a little more on those items to get high quality goods that last.

Learning the right savings habits is a great thing and it’ll benefit you in the end. However, not all savings hacks are worth the money you think you’re saving.

More often than not, these savings hacks can harm you more than help you. Be aware of those things you can save on and those things you just have to spend a little extra on. You’ll be happier for it.

What are some beneficial ways you save? Do you have any savings hacks gone bad?