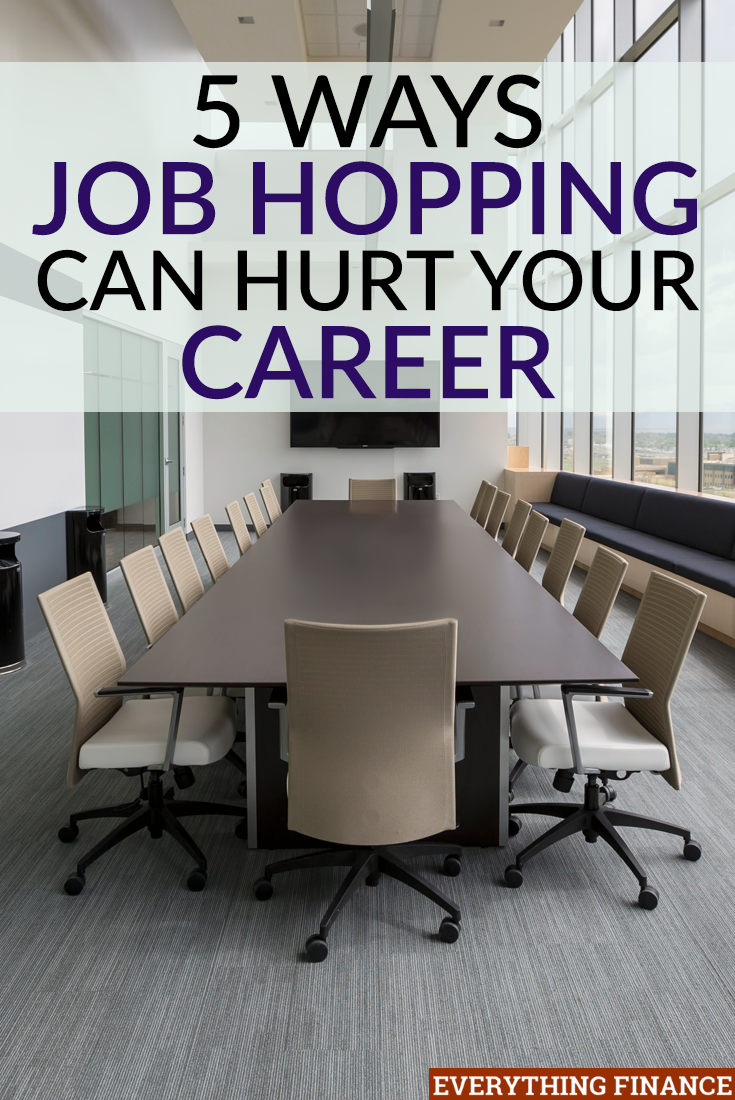 To our parents’ generation, company loyalty was everything.

Most people began and ended their careers at the same company.

Fast-forward to today, and you’ll find a generation of employees that tends to hop from one corporation to the next.

Everyone you meet is dead-set on finding his or her dream job.

Too many spend a couple of months in one position, only to become frustrated that it’s not what they expected, or that their careers aren’t moving quickly enough.

Although there are some benefits to job hopping, I think many would find that if they take a breather and give a job a little more time, the position they’re thinking of giving up would provide them with some of the skills and experience they need to be successful.

While it may seem like a good idea at the time, job hopping can actually hurt your career. Here are a few reasons you should think twice before giving your two-weeks notice.

Your Skills Aren’t Developed As Efficiently

If you’re always focused on the next best thing, are you ever really focused on your current job? By constantly job hopping, chances are, you aren’t really taking the time to become fully invested in your position.

This means you aren’t fully learning the skills that position could be teaching you. Any skill or experience your job may give you is going to take at least a year to fully learn, and it takes even longer to really polish those skills.

Moving from job to job could cause gaps in the knowledge and polish of those skills you so proudly display on your resume. While those gaps may not be obvious early on, even to you, they’ll become more apparent down the road and may be visible to your new employer.

Although younger generations see job hopping as a way to gain more experience and skills in a quicker period of time, more conservative employers, or those of the baby boomer generation, may feel a little bit differently.

In fact, upon speaking with a manager or CEO of said generation, you’ll find that job hopping on a resume is an instant read flag. It may cause them to hesitate before hiring you.

While not every hiring manager will feel that way, it’s a gamble you might not want to take. A company may be more hesitant to invest their time and resources in training you if they fear you’ll leave them in a year or less. You’ll no doubt regret it if job hopping costs you your dream job.

You May Become Too Pricey

For some people, switching jobs is all about getting a pay increase. While getting a bump in salary is a good thing, your bumps might run out.

If you start to feel restless in your position and begin looking for a new challenge, you just might find that you’ve become too pricey for some employers.

One of the factors companies evaluate when hiring candidates is their price tag. In a pile of great resumes, you could be overlooked for your heavy salary expectation.

Companies may be willing to pay for a great candidate every now and than, but you have to be careful not to price yourself out of your job market. It could lead to a potential stall in your career later on, or cost you a job that could provide a great experience even if the pay is a little lower than you were expecting.

Are you a serial job hopper? This isn't a great career move 100% of the time. Here's why Click To Tweet

You Could Compromise Your Network

You’ve most likely heard the phrase “it’s not what you know, it’s who you know.” Unfortunately, it couldn’t be truer when it comes to the job market.

Although job-hopping may seem like it’s expanding your network, it can also have the opposite effect. Even if you leave in the nicest way possible, the mere fact that you’re quitting so soon could rub your employer the wrong way.

Unfortunately, that could leave you with a not-so-great reference and an ex-employer who might not be so quick to vouch for your abilities. Again, while some employers might be okay with the generation of job-shifters, others may look at it as unreliability, which leaves you with one less connection.

You Could Make Yourself Dispensable

Unfortunately, the job market today sees a lot of layoffs, which can explain the rise in job hopping, at least to a certain extent. Why pledge your loyalty to a company that could turn around and let you go a couple of years later? Many younger people saw that happen to their parents, and they decided to work for an array of companies instead.

While job hopping may seem like the answer to lay-offs, it can sometimes backfire. If you haven’t spent some hard-earned years at your company, you haven’t had the opportunity to forge a great, solid relationship with that employer. They may feel less attached to you and fail to see your worth and what you really bring to the table.

After all, it can be difficult to make much of an impact in a year. Even if you do make an impact, some employers may automatically feel a loyalty towards long-time employees when it comes time to let people go in a layoff. All in all, if the time comes when a company has no choice but to downsize, you’ll likely be one of the ones thrown in the discard pile.

I’ll be the first to argue that the generations succeeding the baby boomers have, at times, had a rough go at the job market.

Although most of us graduated with degrees and had ambitions to do great things, our first job or two often failed to meet our skill level or even failed to really support us financially. Or, we were told the phrase “you need 2-3 years experience” when applying for entry-level jobs. Hence why the younger generations have shifted companies with a never-ending restlessness. They were merely hoping to gain valuable experience and finally reach a position that equated with their passion and knowledge.

While job hopping isn’t necessarily a bad thing all the time, it is a move you should make with caution. Think before you quit. Ask yourself if it’s really a beneficial move, because if it’s not, it could harm you more than you think.

What do you think of job hopping? Have you job hopped before?