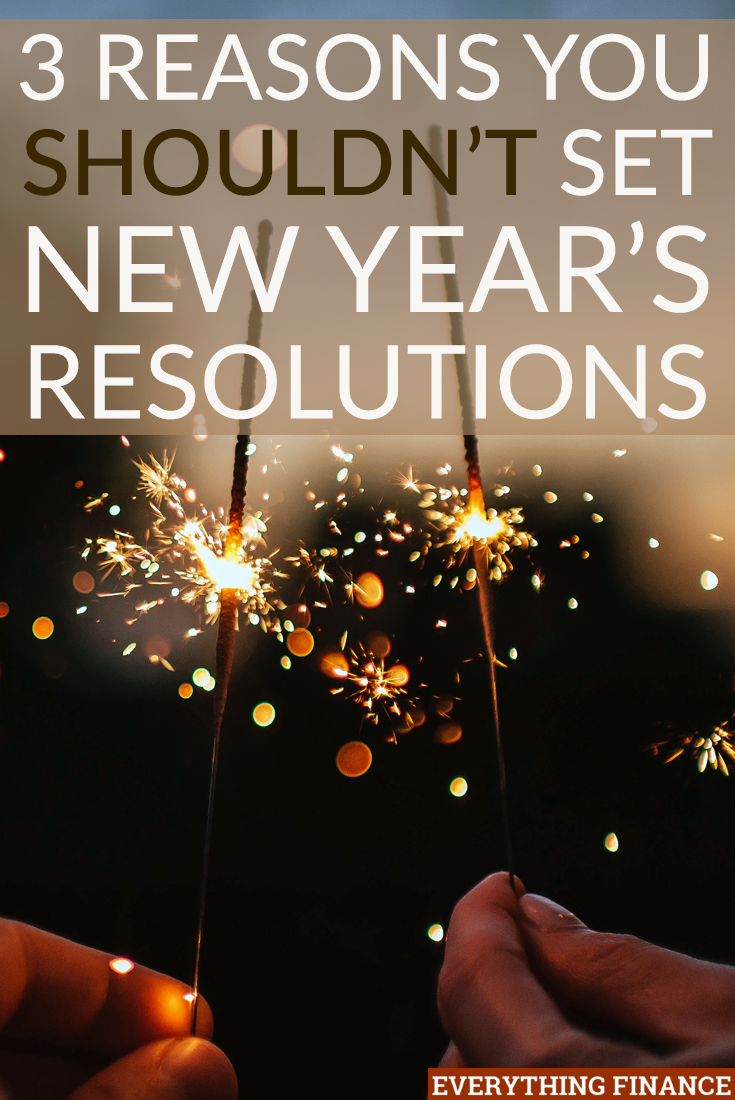 It’s almost midnight on December 31st, the ball is about to drop, and everyone around you is counting down from ten, ready to toast in the New Year.

More likely than not, you’ve already thought of your New Year’s resolutions for the coming year.

So, you make a point to set your goal and come January 1st you’ll stand steadfast in achieving that goal.

Fast-forward two or three months later, however, and you might find your goal abandoned and completely forgotten. Meanwhile, you’re back to the same old routine you’ve always followed.

While there’s no harm in not sticking to your resolution, it begs the question: why do we keep setting goals every year that we never actually achieve?

Instead of following the same pattern in 2017, here are three reasons you shouldn’t set any New Year’s resolutions this year.

1. You Dream Too Big

Most people think that their New Year’s resolutions have to be some big, impactful goal. So, they set lofty aspirations like losing 40 pounds, getting organized, falling in love, or traveling more. While these are wonderful ideas, they tend to be both too large and overwhelming in number, or much too vague.

If you start off big, the number you’re trying to chip away at will start to seem more and more demotivating as time goes on. If every time you accomplish a small goal, it seems like you still have a mountain to tackle, giving up seems like the all-too-easy thing to do.

On the other hand, if your resolution is too vague, it can be impossible to know where to start. Therefore, you may start the year taking small steps here and there, but without a clear path of direction, your goal will quickly be tossed aside.

This is why it’s better to be as specific as you can with your goal so that the path to that finish line is clearer and easier to follow. Failing at your New Year’s resolutions year-after-year ultimately leads to you feeling worse about yourself than you did to begin with.

Have you ever truly thought about why you set a New Year’s resolution? Yes, you may have things in your life you’d like to change. But if you haven’t tried to change them before now, why is the New Year any different?

It seems to be that everyone thinks there’s some unwritten rule that you have to set a resolution come January 1st. Instead of an intrinsic motivation, being that you strongly have the desire or urge to improve some aspect of your life, you probably set a goal because that’s what everyone else was doing.

Most people see others post on Facebook about their newly set goal or see crowds flooding the gym in January and they start to think that they, too, need to work towards something.

Again, while this isn’t a bad thing, you might be setting yourself up for failure. You only have so much energy in a day to focus on everything you want to complete and accomplish. So if you’re not sincerely motivated, decision fatigue will start to set in and your resolution will become a thing of the past.

To truly improve and reach your goals, you have to want to do something for you and only you, not for anyone else. Don’t rely on the praise or validation of anyone else, and don’t feel like you have to set a goal only in January. Do things for yourself and on your time.

3. You’re Going About it the Wrong Way

Apart from not having the proper motivation, another big mistake people make is the way in which they attempt to achieve their goal. Like those who start at the gym in January, they have a tendency to dive in deep and go hard at first, only to find out that they quickly tire or can’t keep up at the pace they started with.

For example, if exercising hasn’t been a part of your life until now, telling yourself you’re going to workout six days a week while also turning your diet around probably isn’t a habit that’s going to last long.

You can’t drastically alter your life and expect yourself to keep up, which is the way many people go about resolutions. Goals tend to be better in a short-term timeline, whereas many resolutions focus on long-term aspirations.

Instead of focusing on one large resolution, it’s better to focus on creating processes and small, habitual changes that are easier to stick to. Don’t set a goal to lose 50 pounds; challenge yourself to eat a little better every day and get up and move more.

Challenge yourself to write a little bit every evening instead of committing to a whole book. Or forget about reading 50 books in a year, and focus on reading every night before bed. By creating small habits and processes, you give yourself more attainable goals to achieve and decrease the likelihood that you’ll give up.

All this being said, striving to make yourself healthier or hoping to better yourself by setting and accomplishing goals is still a healthy part of life that you should absolutely continue to do. The key part to successfully doing so, however, is not forcing your goals, but establishing them and working at them when the time is right for you.

Don’t just jump on the New Year’s bandwagon and feel like you have to declare a resolution as soon as January 1st hits. This is just like keeping up with the Joneses. The pressure of following in everyone else’s footsteps without any real motivation of your own will only lead to failed attempts and disappointment.

So instead of announcing your resolution with the rest of the world as midnight commences, have a toast, share a kiss, cheer in the New Year, and wait until you’re truly committed to work on any life goals.

Do you set New Year’s resolutions every year? Have you successfully stuck to a resolution?