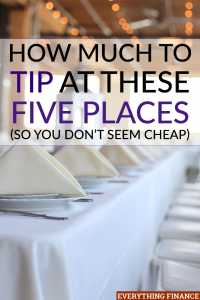 Have you ever been in a situation where you had no idea whether or not you’re required to tip someone? Well, you’re not alone.

If you’re on a budget you often don’t want to tip too much, but on the other hand, you also don’t want to tip too little for fear of coming off cheap. It can be hard to know how much to tip someone and every situation tends to vary. Plus, depending on who you ask, you’re bound to receive a slew of different answers and suggestions.

The truth is, for many workers, tips are more than just a polite gesture. They are often the key to making good income, which means your tips are worth a lot to these people. Here is how to tip at these five places so you never appear cheap.

The word tip may imply a voluntary behavior, and in the past, that may have been the case. But in today’s world, unless you’re going to a buffet or cafeteria, tipping isn’t exactly an option when you dine out.

Unfortunately for those in the waiting profession, federal law only requires a base payment of $2.13, unless they make no tips, in which case they still only make minimum wage. At the end of the day, those amounts don’t equate to a living wage.

A good rule of thumb for tipping wait staff is to tip at least 20 percent. The only time this may not be the case is if there is reasonable cause due to poor service. But if it’s not justified, it’s in poor taste to tip lower. It is important to note that some restaurants are doing away with the “tipping optional” option altogether and simply adding gratuity onto your bill from the get-go. Be sure you always double check the bottom of your bill beforehand so you don’t accidentally tip another 20 percent on top of that!

Waiters aren’t the only ones who get paid minimally and live on tips. Bartenders rely on tips and their tips rely on the amount of drinks they make. Depending upon your order, you should be prepared to tip accordingly. If all you order is a beer, $1 is often sufficient. However, if you order a more complicated cocktail, one that requires multiple ingredients and a couple of minutes to make, then you should at least give a couple of dollars.

Furthermore, by being a generous tipper, within reason, you’ll likely receive better service. If you’re running a tab, however, it’s adequate to tip 20 percent to that.

Barista’s at least make minimum wage, but as the complexity of coffee has risen, most people feel compelled to leave some sort of tip. Leaving $1 for your latte is best practice, but if you must, change will work as well. After all, tips are just a bonus to a barista.

When you stay at a hotel you’ll often encounter a variety of workers that all require a tip of some sort. Whenever someone assists you with your luggage you should always tip them. Usually, $1 per bag is sufficient.

Housekeepers are a part of your hotel staff that don’t often get paid very well, but do a lot of work. That being said, depending on the initial cost of your hotel and the quality of work done, you’ll probably want to leave anywhere from $2-$5 a night. Of course, if you have a day where your room goes without cleaning, you aren’t obligated to pay tip.

Lastly, is the hotel valet. If you do decide to valet your car, you need to tip the attendant each time he brings your car back to you, this is especially the case as you may have a new attendant each time. A good rate for the parking attendant is also between $2 and $5.

Whether you’re taking a cab, a bus, or have a personal driver, you should expect to tip each one. 15 percent in most cases is sufficient for a cab driver, however, 20 percent has become customary as well.

Like anything, depending on the driver, you can make that decision, unless of course he or she takes you in a roundabout way, in which case, I’d go with 15.

Personal drivers from a service should be tipped about the same. There is a little difference in services like Uber and Lyft, where tip isn’t customary, although in many cases, greatly appreciated. In those situations, any bit, say 1-5 percent will do.

Bus drivers only need to be tipped if they handle luggage, in which case $1-$2 is acceptable. The exception to this rule could be on a tour bus, where it’s often polite, if you’ve kept the same driver, to tip at the end of your trip.

Personal and beauty services can get a little tricky sometimes. Hairdressers and barbers usually receive 15 to 20 percent for their services. Barbers should receive at least a minimum of $1 for a cut, and a shampoo person should receive $2.

If you go to a nail salon, 15 percent is customary for a manicure or pedicure. Any sort of spa service, such as a facial or massage should have 15 or 20 percent added on to the bill as well. The exception to that rule is if the owner of the salon performs your service in which case no tip is required.

When provided with good service, giving a generous tip is not only polite on your part, but can at times ensure good service in the future as well. For so many workers, tips are a major part of their income, so when you don’t tip or tip too little, you make more of an impact than you realize. And should you find yourself in one of these places in the future, you can be sure as to how much you should leave.

Do you tip for these services? When are some other times you should tip?