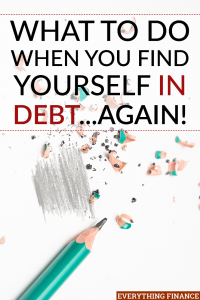 My husband and I spent the first four years of our marriage paying off nearly $45,000 of debt. It was such a relief to get out of debt and we truly felt liberated afterward. We spent the following year saving up for our down payment on our house and also taking some well-deserved vacations that we paid for in cash.

And then, like your average Americans, we fell back into an ugly debt cycle.

We bought our house and accrued mortgage debt.

Then we found out we were expecting.

And even though we were still saving a lot of money, we didn’t have enough money to replace both of our two-door vehicles, which are a no-no for infant car seats. So we accrued car loans.

Slowly, we found ourselves back in debt. And even though, we have enough cash to pay it all off, we have chosen not to and prefer to have easy access to cash in case of a family emergency. I guess that’s what becoming a parent and homeowner does to you.

As easy as it would be to continue to go on our merry way, we decided that we would take charge in 2017 and get a hold of our finances. Here’s what to do when you find yourself in debt again.

Make a Plan of Attack

For months, we let our debt just do its thing and made the minimum payment because we didn’t want to deal with it. We had a newborn, we didn’t have a lot of time to budget, and we put our finances on autopilot. We avoided budgeting like the plague and figured we would get to it “some day”.

Luckily, we finally pulled our heads out of the sand and decided to make a plan to get ourselves out of debt. Luckily, our church decided to do Dave Ramsey’s Financial Peace University and it couldn’t have come at a better time.

Get Back on a Budget

The very first thing we decided to do was get back on a budget. That involved putting the baby to bed, sitting down, and figuring out our debt, income, and monthly expenses. The first time, it took a lot of time and effort because we hadn’t done it in such a long time. But once we get into the habit, we expect it will run much more smoothly.

In debt again? Here's what you need to do to get back on track with your finances. Click To Tweet

When you make a budget, it’s easy to see that there is a lot of miscellaneous money that just sort of disappears and leaves you wondering, “Where did all my money go?”

With a budget, it forces you to assign a certain amount of money to each category, when that money is spent, you’re done. It also forces you to realize where you’ve been overspending and causing leaks in your budget.

For us, we really had to pare down the amount of money we were spending on take-out. That was a big budget buster for us and it was important that we use that money to pay off debt instead.

Get Out of Debt Again

For now, our focus is to pay down our debt. We’re already working on a plan so that we will hopefully be debt free (except for the mortgage) within two years! Much better than the four years if we only made minimum debt payments.

Overall, once you get out of debt, you want to stay out of it. And this was a good reminder as to how easy it can be to fall back into the consumer spending trap. The good news is you can always get right back on the debt-free wagon by coming up with a plan and taking the necessary steps to get there.

Have you ever found yourself in debt again? Why? How did you deal with it?