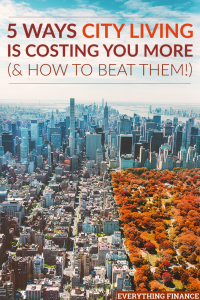 Residing in a city has an array of wonderful advantages. Between the job availability, culture, entertainment, and population diversity, the city offers big draws for many.

Unfortunately, as great as all of those things are, living in the city can also cost you a hefty price. Television and films often make city living look easy. They show young twenty-somethings with entry-level jobs, living in grand apartments that they could never afford in reality.

It’s a pretty picture. But for most, the reality is that the cost of city living makes things difficult. Everything is costly, especially your rent, which means saving is nearly impossible.

Nonetheless, just because you’re not a millionaire, doesn’t mean city living is beyond your reach. Here are five ways city living is costly and how you can beat them!

One of the biggest and worst expenses in the city is rent. It can be impossible to find any size apartment, no matter how small, for anything less than $1,000 a month, and that’s before utilities. No one wants a decrepit apartment the size of a shoebox, however, it can begin to seem like that’s what you’re forced to resort to. Thankfully, there are ways around the exorbitant city rent.

One obvious answer to the rent problem is of course opting for a roommate, or multiple, of course. Single living might be your ideal, but until you can afford a place yourself, living with others can cut the price of rent and utilities to a more suitable number.

Another major factor to consider when finding an apartment is the location. In any city, certain neighborhoods are just going to be more expensive. Instead of chasing the prestige of a certain zip code, search your city for a neighborhood that can accommodate your budget. You might be surprised to find nicer homes with just as many entertainment options in another part of town.

One of my favorite aspects of the city is the variety and number of fantastic restaurants surrounding you. It’s tempting to want to try a new one multiple times a week and ditch your own kitchen, especially after work and likely a long commute.

Unfortunately, eating out, especially in a large city, isn’t exactly cheap and can rack up a large food bill quickly. Resist the temptation to dine out; make a point to cook at home. Utilize coupon apps and look out for sales at your grocer for great deals on ingredients. And if your friends have a tendency to go out, make a point to eat before and meet up with them later.

Most big cities have an array of exciting and fun activities from concerts to sporting events to festivals, theater, and museums. Of course, a lot of them also cost quite a bit as well.

Thankfully, another big advantage of living in the city is that there are also lots of fun, free events as well. You can find everything from outdoor concerts, openings, plays, and art shows that are all offered at no cost. Check your local newspaper, coffee shops, and online blogs for a list of events happening throughout the week.

Don't give up on city living just yet. There are ways to avoid the high cost of living in a city. Click To Tweet

4. You Fall Prey to Other’s Lifestyles

A big trap many people fall into is trying to keep up with others. This is an issue for many outside the city, but for those that live in the city, it’s even harder to not get caught up in trying to emulate those around you. A bigger diversity of wealth tends to live within the city, which means you’ll probably see a multitude of people who are able to spend money on expensive clothes, homes, and activities. And because we’re human, it’s difficult not to try and keep up with those people, even if it’s not in our budget.

Nonetheless, do your best to budget and create a lifestyle that suits you. Don’t let yourself get hung up on what others around you can afford, as it’ll only cause you financial heartbreak. Figure out what’s worth spending money on to you and learn to live accordingly. You and your account will be much happier if you do.

5. Your Car is Costing You

Living in the city means heavy traffic. More often than not walking and public transportation are the quicker, more suitable means of travel in a large city. Owning a car in the city is also harmful to your finances as well. Your car payment, gas, insurance, and parking bill can sometimes equate to more than $500 a month, and unfortunately, it’s not likely you’ll drive it much to begin with.

Instead of wasting your money on your vehicle, sell it, save money, and go an alternate route. In place of your car, opt to take public transportation, taxis, or a carpool instead. Or you could walk or ride your bike, which is a bonus since it’s free exercise as well. Whatever means you choose, the money you save from your car can be redistributed to other areas of your budget.

Books and Hollywood make city living look glamorous and exciting, and in many cases it is. There’s so much to do, exciting and new opportunities, and new people to meet, which is why so many choose to venture to the big city.

Underneath all that glamour and adventure, however, is an exorbitant price tag. It costs a pretty penny to work and live in a city and the majority don’t have the funds to do so carelessly. All that being said, you don’t have to discount living in the city just yet. The key to living comfortably and within your budget is tailoring life to fit your financial needs, not the other way around.

What are some other things you’ve found to be more expensive in the city? What do you do to offset those extra costs?