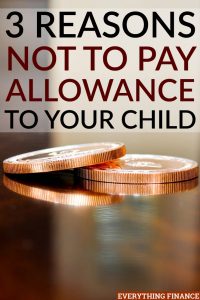 Kids go through all kinds of interesting stages in life. I find it interesting, and a bit entertaining, that my 7-year-old is now in that state where he’s having conversations with his friends about more than just toys.

The other day, he told me he wanted to start getting paid an allowance after talking to a boy in his class. The classmate explained to him how his parents gave him money for doing small tasks around the house, like cleaning up his room and taking out the garbage.

I can understand many of the reasons why parents start paying their child an allowance. It can help:

However, something inside me just wasn’t buying it. I decided not to give my child an allowance for now. Here are 3 reasons why along with what I opted to do instead.

1. He Doesn’t Need to Get Paid for Doing Things He Should Normally Do

Right now, there’s not a ton that my 7-year-old can do around the house. My husband and I do the cooking and cleaning. All my son needs to do is pick up his toys after himself, and make up his bed each day.

I’ve tried teaching him how to hang up his clothes and vacuum a bit, but he’s not doing these things on a regular basis. Regardless, all of these chores listed are things he can do to help out and contribute to the family.

I don’t think he should get paid for normal things he does around the house since because that could set him up for unrealistic expectations later on in life. My husband and I don’t get paid to cook dinner and clean up the house.

2. I Fear My Child Will Be Motivated to do Things For Money

My child is in a stage right now where he’s interested in having money – to buy toys I’m guessing. He’s not necessarily interested in doing his chores and helping out around the house. He’s just looking forward to what’s in it for him.

I actually see that as a bad sign. I don’t want my son to be motivated to do things just for money.

There are many other benefits that come from doing chores and cleaning up, like having a neat home or room to enjoy, and avoiding clutter and pests that may show up when there are a ton of crumbs around.

I fear that if I start paying my child an allowance this early, he may not be motivated to help out and clean in general in the future if money isn’t involved. It’s important to teach my son that cleaning up is a natural habit that everyone should be happy to do regardless of if they’re getting paid or not.

Plus, he really doesn’t need any new toys or clothes since we already take good care of him in those departments.

I don’t want my son to be motivated to do things just for money. Click To Tweet

3. There Are Others Ways to Teach Your Child About Money

Some parents may argue that paying your child an allowance can help them learn about money. Without having money of their own how can they learn how to manage money properly? I don’t entirely agree with this mindset.

Right now, I know that my son wants money so he can buy extra toys (that he doesn’t really need). My husband and I get him plenty for Christmas and his birthday, and my mom gets him things occasionally.

Sure, I could probably give him a small allowance. Then I could teach him how to save a portion of the money instead of spending it. But, I can also teach him how to budget for real life expenses too.

I’m planning on giving him a budget for his birthday party next year. I’ll let him pick everything out so I can actively show him how much things cost. I can also teach him about budgeting while we shop for food in the grocery store instead of just doing everything myself.

We can also discuss saving up for college. Plus, I really want to get him a stock gift card for Christmas so I can introduce investing.

What I’m Planning to Do Instead

While I just mentioned a few ways I want to teach my child about money instead of paying him an allowance, I still don’t mind giving him money every now and then. I’m just not comfortable with feeling obligated to paying him a weekly allowance for doing regular chores that should be done anyway.

Instead, I’m willing to give him money for going above and beyond my expectations. For example, if he were to get straight As in school in future years. I’m also okay with helping him collect spare change that’s found around the house as an attempt to ‘grow his savings’.

My husband and I are really bad about leaving spare change around and doing absolutely nothing with this. A few weeks ago, we decided to allow our son to put some of the spare change from around the house into his bank.

Quarters are off limits because we tend to use those for washing our clothes. But, as long as I approve it, anything else is fair game for his piggy bank. My hope is that collecting spare change will teach my son how to be resourceful in future years. He’ll understand that all money is valuable and can add up.

Right now since my child has very few needs and plenty of time to learn more about money. I feel like this is the best solution for us.