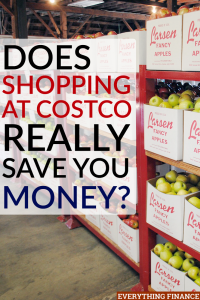 As a frugal person, I am always looking for ways to save money. I’ve seen many moms tout the benefit of having a Costco membership as a way to save when buying in bulk.

But who has ever left Costco without spending at least $100 if not more? I know that we would consistently spend $200 to $300 on every trip. Everything just seems like a good deal!

Knowing that a Costco trip would set me back several hundred dollars, I had to start asking myself if I was really, truly saving money while shopping at Costco. Here is what I found:

Buying More Than You Need

At Costco, I would always end up buying way more than I needed. There is no way to buy just one of something, you end up buying enough ketchup to last you a few years. While it may be a good price, I often found that I would forget about all the ketchup I had stored in the garage and then would buy a small bottle at the grocery store.

This is pretty much the rule with all non-perishables too. Everything lasts a really long time. So, while you feel that you’re saving money, you have to pay for a lot of the savings up front.

Buying What You Don’t Need

I don’t think I’ve ever left Costco without buying at least one thing that I didn’t need. As a busy working mom, I will often shop their clothes because of convenience. Most of the time, I’ll find something. It may be a shirt, yoga pants, or some work clothes at an “incredible deal”. Then I will feel no guilt snagging it. But would I have bought it normally?

And so here is the Costco conundrum: how many times do you buy things just because it’s a good deal, rather than because you really truly need it?

How often do you buy things because it's a good deal, even if you don't truly need it? Click To Tweet

During my Costco hay-days, I would often go once a week. I was “doing good” when I only went once every two weeks. It’s where I did my basic grocery shopping. And the truth is, Costco should not be your everyday shopping grocery store.

Our monthly grocery budget was $500. A Costco shopping trip would easily run us half that. And if I was going twice a month, well…. you can see how quickly our grocery budget would be blown.

Does Costco Really Save You Money?

For a few months, I ended up taking a Costco detox. I didn’t renew my membership right away, and while I did miss the convenience and great prices, I also discovered something else: I was saving money!

That’s right. I was saving money by doing weekly grocery trips at our local grocery store. I was actually sticking to our grocery budget, sticking to our list, buying only what I needed, and there was barely any food going to waste.

I know that there are many Costco lovers out there, but for us, we actually saved money by not having a Costco membership. We did eventually go to Costco again, but now we go once every other month to stock up on key items.

Be smart when it comes to Costco, and ask yourself if you’re really saving money with your Costco membership.

Do you shop at Costco?