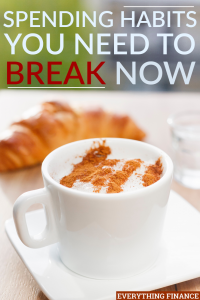 While saving is important, so is spending because it’s inevitable. The way you spend money has a huge impact on your financial wellness.

If you budget like most of us, you’ll know that sticking to your budget can be tricky but it’s necessary. If going over budget ever month is common for you, you probably have a bad spending habit that you need to fix. Otherwise, your budget could be unrealistic.

Going over budget consistently isn’t good because it could mean you’re spending more money than you earn which can lead to debt.

To fix this bad spending habit, start tracking your spending and readjust your budget. If you know that you’re spending too much money on dining out each month, your options include increasing the amount for that particular budget category or reigning it in and controlling it better.

You can also try using the cash envelope system for specific budget categories as well to ensure you don’t overspend.

Impulse buying is a hard habit to break. It involves making unplanned purchases based on emotion instead of spending mindfully. What’s dangerous about impulse buying is that sometimes you don’t even notice how it can affect your finances.

You may be in a store one day and you see an item that’s on sale or you may be driving and decide to stop by Starbucks and get a coffee. There’s nothing wrong with spending money those ways, but if you regularly make unplanned purchases on impulse, they can really add up and deplete your disposable income.

If you don’t want to spend all your extra money on random knick knacks that you didn’t really even want or need to buy, you’ll have to stop spending on impulse and plan your spending better.

To get rid of this spending habit, you can create a miscellaneous budget category that you stick to for extra, unplanned purchases. You could also try waiting 24-48 hours before you make an unplanned purchase to ensure that you actually need the item and don’t just want to buy it based on a temporary emotion that will leave you regretting the purchase later.

Try simply sticking to your shopping list and avoiding stores that you tend to make impulse purchases in and unsubscribe from mailing lists that send emails that tempt you to buy more stuff.

It's time to break those bad spending habits and achieve your financial goals instead! Click To Tweet

ATM fees can be another voluntary spending habit that can add up over time and eat into your disposable income. Some ATMs fees are as high as $4+ per transaction. Banks also make big bucks from overdraft fees. If you’re going into overdraft regularly from overspending, you could be losing quite a bit of money that could be best spent elsewhere.

To get rid of this spending habit, only use in-network ATM machines so you can check your balance and withdraw money for free. If your bank has an app, you may be able to find nearby ATMs you can use for free while you’re out on the go.

To avoid overdrafts, set up balance alerts for your checking and savings account to notify you by phone or email so you always know what your account balance is. Some banks also have overdraft protection programs where you can set some money aside to quickly fund your account if you overdraft.

All in all, it’s important to make sure you know how much money you’re spending each day and what your account balance is so this is another reason why you should track your spending and check in with your budget frequently.

4. Paying For Services You Don’t Use

Paying for something you don’t use is just like taking your hard-earned money and flushing it down the toilet. It’s pointless. If you have a gym membership, magazine subscription, or any other service that you aren’t using and you have a hard time getting rid of it, you may be in denial.

Sometimes certain products and services sound nice or they’re a trend and everyone is paying for them. Or, you may think that one day you’re going to use them, but that one day never comes because you’re just too busy or it isn’t a priority.

To fix this spending habit, you’ll have to be honest with yourself.

5. Buying Everything That’s On Sale

This is a bad spending habit that can actually be described as a ‘good habit’. If you love catching sales and deals, there’s nothing wrong with it but if you make it a habit to purchase everything you see that’s on sale, you won’t actually be saving any money in the long run.

Retailers know that consumers get excited about sales and practically feel obligated to make a purchase just because something is offered at a discounted rate.

However, there are many sales traps that basically trick you into thinking that you’re getting a sale when you’re actually spending more money. Things like BOGO deals, and buy 10 for $X will cause you to spend more money overall.

To fix this spending habit, get really clear on your needs and values. Realize that just because something is on sale, doesn’t mean you need to buy it. If you weren’t considering the item before the sale, odds are you probably don’t need or want it and just want to feel like a savvy shopper who caught a good deal.

Have you ever had any of these bad spending habits? How did you break them?