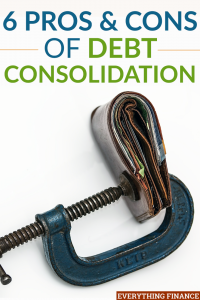 When you have multiple debts you’re juggling, it can seem overwhelming and impossible to pay them off. You may also find yourself wondering which to put money towards first.

By choosing to consolidate your debt with a personal loan, you roll all your debt into one lump sum that you can pay off with a loan.

There’s an array of options when it comes to consolidating your debt that can help you manage it and your finances better. You can consolidate high interest credit card debt onto a lower interest card, or with a personal loan from SoFi.

That being said, like in most financial decisions, the choices you make ultimately depend on your situation and life.

So, how do you know if debt consolidation is the right route for you and your money? Take a look at these six pros and cons to help you make a good decision.

Of course the greatest pro to debt consolidation is the fact that you narrow your debt down into one, easy payment.

Between your monthly bills and expenses, adding in an array of debt payments only serves to make your financial life more complicated and more difficult to keep track of. You’ll inevitably stay more organized in the long run.

Moreover, you’ll make payments with ease since you won’t have to decide which account needs to be paid first or what amount you should put towards each payment.

Every debt account you have likely has its own interest rate. Some are probably much higher than others, which can make paying off that account all that much harder. Often times, at the end of the month the amount you end up putting towards various accounts might equate mostly to interest alone.

By consolidating your debt, however, you only pay interest on one payment, which usually means it’s also a lower rate. In addition to interest rate, the fact that you’re only paying down one account means the payment itself might be lower as well.

3. You’ll Pay Off Your Debt Faster

When you pay off multiple debts at once, you likely put a small amount here and there towards various accounts. That being the case, the amount that you chip away at for each account is usually not significant enough to eat away at your debt very quickly. That’s especially the case when you consider the price of interest as well.

Boil your debt down to one solid payment, however, and you might find that you can actually pay off your debt faster. Between the lower interest rates and one payment, every payment you put towards your debt will make a bigger dent in your payment, ergo enabling you to hopefully eliminate your debt more quickly.

Consolidating your debt can be good or bad depending on how you go about it. Click To Tweet

4. You Might Think You Have More Money Than You Do

When you consolidate your debt, you put many of the accounts you consolidated back to a balance of zero. Even with your debt sitting in another account, it can be all too easy to put it out of your mind and zero in on the open accounts you’ve freed up.

While this may not seem like a big deal at first, it’s never a wise decision to take on more and more debt when you’re trying to eliminate existing debt. You’ll find that you merely dig yourself in the hole more and more. If having usable accounts is too tempting to you, then you may want to think twice before consolidating your debt.

5. You Could Spend More

While in some cases you could pay off your debt faster, there are other times when it might take you longer. If this is the case, it will actually cost you more. Depending on how much debt you have when consolidating it, the amount you have to pay off could be large.

If that’s the case, you may not be able to make as big of a dent towards that amount as you’d like each time you make a payment. In turn, you may accrue more interest, which would only serve to increase the amount you ultimately owe. The key to ensuring this doesn’t happen is to keep making as large a payment towards your debt as possible.

6. It Could Put You in a Worse Situation

In some cases, depending on how you go about it, consolidating your debt could put you in a worse financial situation instead of helping you.

For example, if you get behind on certain payments because your debt is consolidated, say if it was for your car or house, you could end up putting your possessions on the line and could risk losing them.

Furthermore, if a debt consolidation organization thinks they can receive a lower settlement on your debts, they may hold you payment instead of giving it to your accounts. If that’s the case, it’ll appear as though you’ve become delinquent on your accounts and in turn, could destroy your credit score and history rather quickly, and soon you will have to learn how often can you file bankruptcy in order to survive your credit.

Debt consolidation isn’t right for everyone. It’s important that you seriously consider your financial habits and situation before making a decision. Evaluate all your pros and cons and make an informed decision.

Debt consolidation won’t solve larger, underlying problems. It can’t help if you have trouble staying on a budget or maybe you just aren’t organized financially. Whatever it is, it’s important to make sure you get yourself organized and prepared to work towards eliminating your debt before rolling it into one lump sum.

Be sure you consider all your options towards debt consolidation. You might want to speak with a professional before making the move to consolidate. And in the end, if you can come up with a well-thought-out plan to work towards eliminating your individual accounts, it may be worth it to pay of your debt in smaller increments instead.