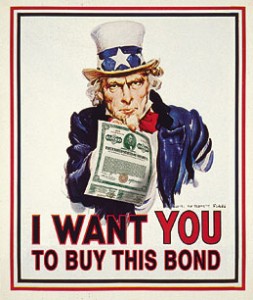 While the risk of “default” in the U.S. or even most of the corporations is still very low, the risk of devaluation is high. When interest rates rise, the value of the bond goes down. If you can hold the bond to term and the municipality or corporation pays back the principal, then you’re going to be fine. However, in the meantime, if you need to sell the bond to cover expenses, you may have to sell it for less than you paid for it and in some cases, you might not be able to sell the bond at all. There might not be any buyers willing to purchase your bond, especially when they can purchase other bonds with a much higher interest yield. Bond funds also fall in value when interest rates rise.

Typically, people think that the only way interest rates go up is if the Federal Reserve increases the rate. Since the Feds have indicated economic conditions “are likely to warrant exceptionally low levels for the federal funds rate for an extended period,” many bond investors have a false sense of comfort in their bonds and bond funds. However, the threat of a downgrade adds interest rate risk now.

A downgrade of the U.S. from AAA to AA could have a quite large ripple affect. Any municipality, corporation or Non-Government Entity (NGE) that relies upon the U.S. government for a portion of its revenue will be impacted. According to Beers, Bovino and Moulton, of the Sovereign Debt team at Standard & Poor’s, “While banks and broker-dealers wouldn’t likely suffer any immediate ratings downgrades, we would downgrade the debt of Fannie Mae, Freddie Mac, the ‘AAA’ rated Federal Home Loan Banks, and the ‘AAA’ rated Federal Farm Credit System Banks to correspond with the U.S. sovereign rating. We would also lower the ratings on ‘AAA’ rated U.S. insurance groups.”

There are four U.S.-based corporations with AAA ratings, which Standard and Poor’s said will not be affected by a U.S. downgrade – namely, Automatic Data Processing, Exxon-Mobil, Johnson & Johnson and Microsoft. The Army & Air Force Exchange Service, the Marine Corps Community Services, and the Navy Exchange Service Command would be downgraded, however, which could ripple into corporations that supply these government entities with products and services.

While most people are assuming that the debt ceiling will be raised and there will be no default on any bills, if that is not the case, then there will be a severe, systemic shock that will not be easy to recover from. According to Standard and Poor’s Credit Analysts John J. Bilardello, Ronald M. Barone and David Tesher, “The bottom line is that any sustained systemic shock at this time could quickly undermine corporate operational performance and free cash flow. Combined with a freeze in the debt markets, this would likely have a severe effect on corporate liquidity and ratings stability, and, in our opinion, ultimately negatively affect nearly all corporate sectors.” If that doesn’t get you to call and write your Congressional leaders right now, to demand that the budget savings over the next ten years exceed $4 trillion, I don’t know what will!