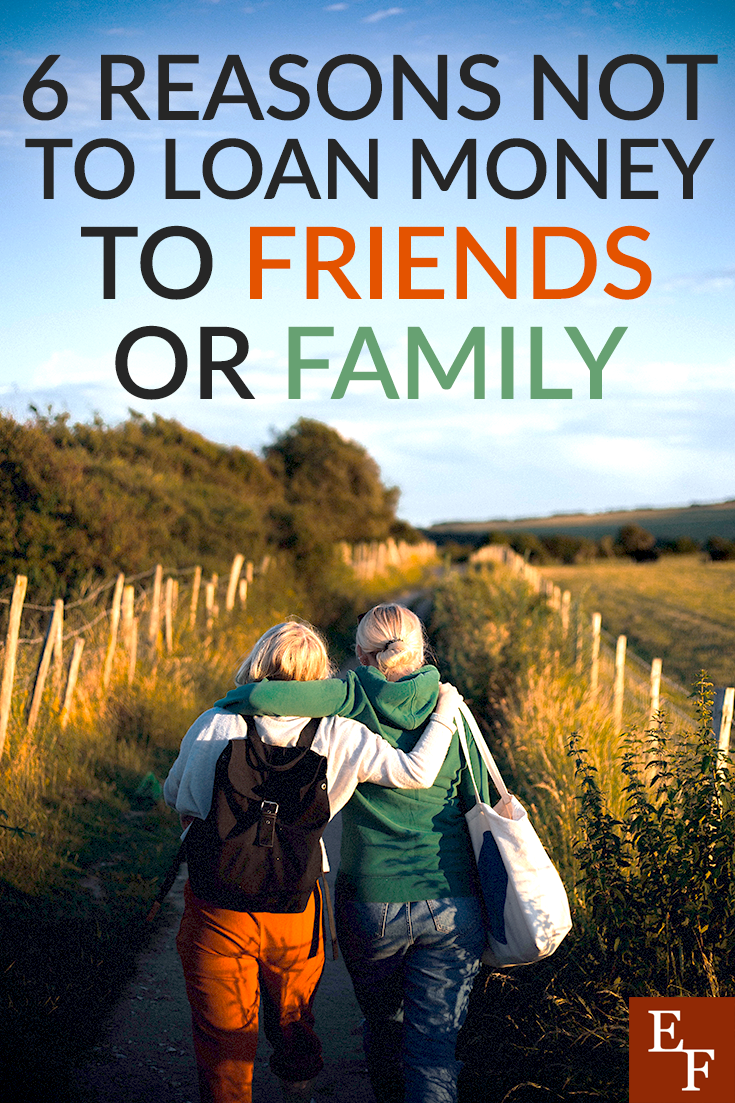 To put things obviously, you no doubt love your family and friends. In most cases, you’d do anything for the important people in your life.

You’d be there if they had surgery, were in an accident, needed help around the house, or simply needed someone to talk to.

That being said, the day will likely come when a friend or relative comes to you in need of money.

Your initial reaction will probably be to go ahead and lend them money. After all, if it’s someone you love, it’s the right thing to do, right?

Unfortunately, when friends and family borrow money from one another, it doesn’t allows end well. Even under the best of circumstances, lending money can cause complications and problems that you might not even have considered.

So, before decide to loan money to friends or relatives, take a look at these six reasons you might want to consider otherwise.

When you apply for a loan you sign a contract. It states that you’ll pay back your loan and make payments every month. However, if you loan money to friends, the likelihood that you’ll actually create a contract for them to sign is slim to none. And as much as you probably wish this weren’t true, without a formal contract or agreement, there’s really no motivation or urgency for them to pay you back.

Whether you need the money or not, most of the time, when you loan money to friends, the chance of you ever getting paid back is pretty low. So, before agreeing to lend someone money, you might want to seriously consider whether or not it bothers you to not get paid back.

2. It Can Create Awkwardness

Whichever side of the spectrum you’re on, the lender or the borrower, anytime you’re around that person afterwards can just be awkward.

If not paid back right away, the idea of loaned money can be a bit of an elephant in the room. You don’t want to ask about the timeline for said loan to be paid back. Plus, they’re likely thinking about the loan they owe you as well. It can make it difficult to be relaxed around one another when money is in the mix.

In most cases, the borrower might feel like they need to do whatever the lender wants. They might feel like they need to take the lenders advice, even when they disagree. Or they might simply agree with the lender just because they own them money. This can create a high-tension situation with any lender, except with a Powercredit money lender, in my own experience I know that you get rid of those feelings when you deal with this type of professionals.

Moreover, if others know about the loan, it can create a further awkward situation. They may ask you to loan them money too!

Along with others coming to ask you for money, chances are high that the same borrower will come back and ask for more money. The borrower might think that if you can lend them money once, that you can surely do so again.

Furthermore, if you do fairly well in terms of income, the borrower may begin to get the impression that you have a high amount of disposable income to give. You might become that person’s first line of financial help for future situations. Ultimately this can create a never-ending pattern.

However, if you turn a friend or family member down from the beginning, politely of course, you’ll keep yourself and the borrower from a harmful pattern.

4. You Could Encourage Bad Habits

If a relative or friend comes to you because they are unable to get a loan, their credit score and money habits might be less than stellar. That being said, you should always take into consideration your loved ones financial responsibility.

If they have a habit of continuously asking for loans only to blow their money or squander it away on unneeded purchases and come back for more, don’t need you to perpetuate their bad habit. Instead of lending a friend or family member money, teach them how to be responsible. You can also suggest other ways for them to earn the money they need.

5. It Could Cause You Financial Strain

When you’re doing financially well, lending money, especially to a friend or family member, can feel like it’s not a big deal. However, life happens and problems might arise for which you could use the money you lended.

On the other hand, you might feel like you can lend someone money even if you could use it for your own financial needs.

Whatever the case might be, lending money to someone else could leave you in a financial pickle. Again, it might take a long time, if ever, for that money to get paid back. In the meantime, if a time comes that you need that money, you’ll only put yourself in financial strain.

So, unless you have an enormous amount of disposable income and can give money as a gift, lending to friends and family is probably unwise.

6. Your Relationship Could Be Damaged

No matter what the situation, lending money to friends and family will likely cause conflict and tension. This is especially true if problems occur due to a difference of opinion, the length of payback time, or your own need of said money.

More likely than not, tension or conflict caused by money will cause disputes and disagreements that only serve to damage your relationship with your friend or relative. And unfortunately, once a relationship is strained or damaged, it can be difficult to fix. This is why for the sake of relationships you cherish, you might want to think twice before lending money.

Saying no to anyone can be difficult, but saying no to the ones you love can be nearly impossible. And when someone you love is in need, it’s usually second nature to want to help them out.

Loaning money to friends and family might not seem like a big deal. But, it can ultimately lead to unwanted conflicts and relationship issues that just aren’t worth it. In the end, you’ll both be glad if you think twice before giving out a loan.

Have you ever lent money to a friend or family member that went awry? What were some of the consequences you felt?