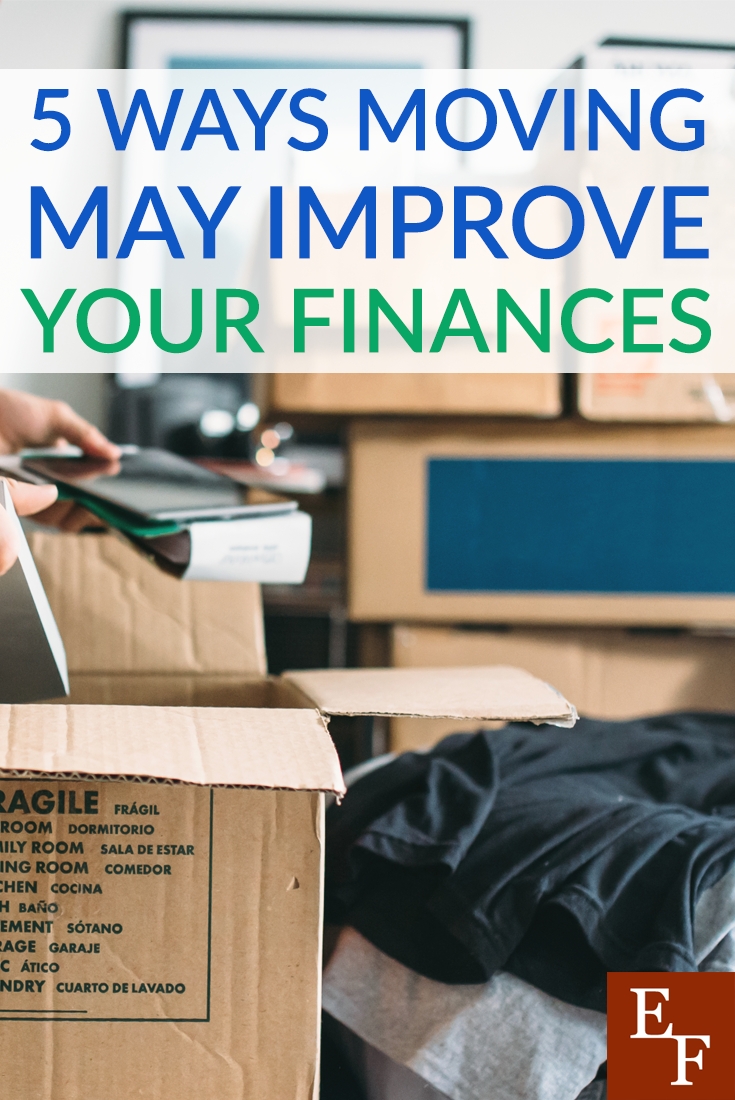 Moving is an exciting and stressful process all at the same time. Dependent upon the reason you’re moving, you might be embarking on a new and exciting chapter of your life. Or maybe you’re simply making a change. Whether you found a new job, are moving for new opportunities, or something else, moving can improve your life.

That being said, as you begin the moving process, the cost of packing up all of your belongings can seem astronomical. While the initial sticker price to hire movers and prepare your home to relocate can seem over-the-top, once moved, you might be surprised by the other financial benefits moving can bring.

If you’re considering a move and are weighing the costs or potential benefits, considering it’s not mandatory, consider these five ways moving could improve your finances as well.

1. Effect on Cost of Living

The difference between living in New York City versus Tulsa is a lot more than simply geography. Certain locations around the United States and world are just more expensive than others, for example when you hire movers Los Angeles you may find that the price is much more affordable than hiring movers at New York City.

Based on popularity, geographical features, and often times cultural, entertainment and job opportunities, certain cities don’t come cheap. In many cases, living in a city with a higher cost of living means that you’ll likely pay more for many expenses from housing to transportation to daily expenses like food.

Even so, it’s usually the case that in said cities you also stand to get paid more as well, and could in turn have more spending power. Depending on whether you move to a location with better pay and higher cost of living or a city with lower cost of living, could drastically affect your finances in a good way. That being said, be sure you weigh your income versus all aspects of living cost to figure out whether or not you’ll truly increase your finances.

Yes, we all pay taxes, no matter where you live. However, what you might not have realized is that taxes are in fact different and vary by state.

All that to say, while you might not pay as much in one area, doesn’t mean you’ll exactly pay less in taxes, it just might mean you pay taxes in another area. Regardless, your state can alter or adjust what you pay taxes on and how much. This means that in some cases, you just might find that you actually do pay less.

There’s no doubt that taxes take a significant portion of your income, so reside in a place with lower ones and you’ll increase your net income.

A $500,000 home in Wichita, KS can easily run up to $1 million in a place like Denver, CO. Housing costs are one aspect of life that can vary drastically from state-to-state.

In most instances, rent shouldn’t be more than 20 to 25 percent of your monthly take home pay. Even then, 25 percent tends to be pushing it. Live in a city like New York or San Francisco, however, and that percentage could significantly raise.

Relocating to a different city, state, or simply outside the main city limits themselves, where the housing market stands to be much cheaper, can reduce what you pay in rent or mortgage, ergo benefiting your finances in the long run.

Like it or not, owning a car is an expensive endeavor. Unfortunately, there are certain cities and states where living without a car would be next to impossible. Your car’s expenses go much farther than gas alone. From routine maintenance to significant repairs to insurance, your vehicle takes up more of your paycheck than you realize.

Move to a city where public transportation is not only convenient, but regularly used by the majority and those expenses could drastically decrease. After all, spending $30 for a weekly unlimited subway card as opposed to filling your car up one or two times a week at $50 already saves you money.

Moreover, that’s not to mention money you’ll save on maintenance, repairs, and depending on where you live, garage or parking fees.

Another aspect of transportation that could be affected by a move is whether or not you have to commute to work. If you travel farther distances to get to and fro, that alone could rack up gas and vehicle expenses. Hence, relocating somewhere where the commute is less, could also make your commute cheaper.

If you’ve ever been on the lookout for a job, you might have noticed that some cities have open positions in abundance, while others open up few and far between. Living in a city with sporadic or lesser job availability can affect your career and finances in the long-run not just in your present day.

Relocate to a city teeming with job opportunities, or where the minimum wage is higher, and you might increase your income. Plus, you might also set yourself up to be in a better financial position in the future.

Between the cost of boxes, the truck, the moving company from Canberra to Sydney, and distance your moving and you’ll likely find that your relocation is anything but cheap. Even so, sometimes even close cities can be significantly different in their cost of living, housing market, taxes, and unemployment rate.

Hence making even a small move can mean moving into a better financial position as well. Relocating can be scary, after all we all fear the unknown. That being said, if you’re open to someplace new or new opportunities, a change in geography could not only improve your quality of life, but your quality of finances as well.

Have you or have you ever considered relocating for a job? What are some ways you’ve found the cost of living to be higher or lower in various cities?