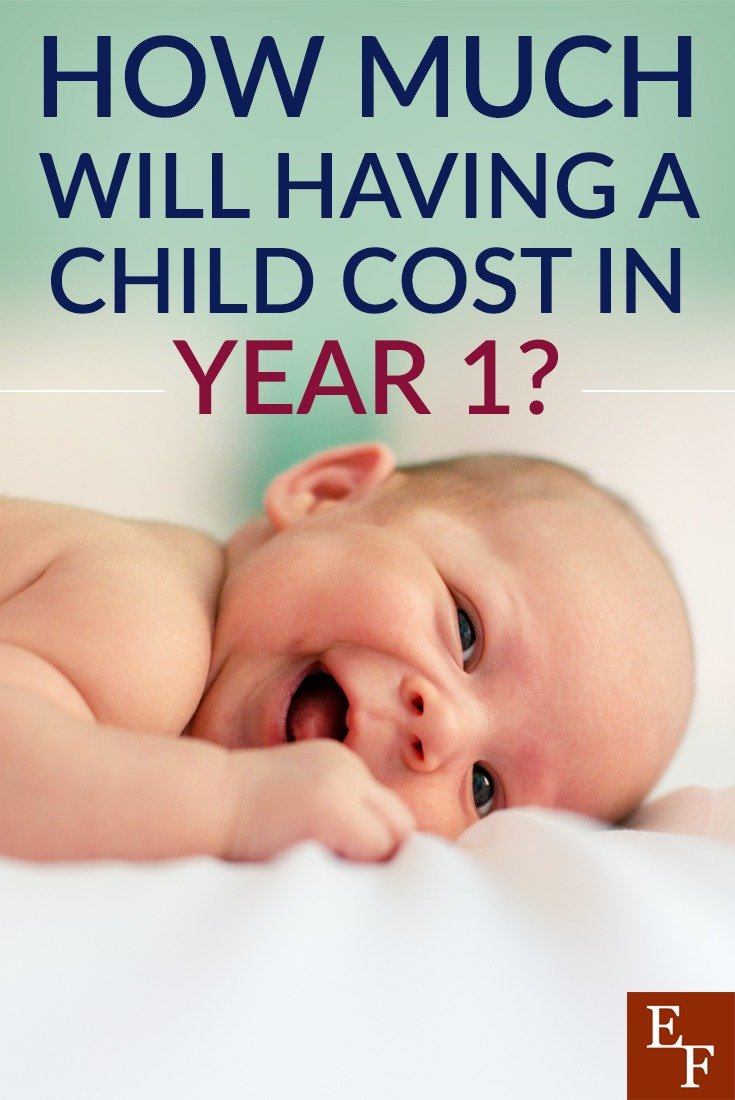 Deciding to have a child is a HUGE decision. One that not only affects your day to day life but can hit your finances pretty hard also.

I know that having a child can be a really exciting time, because I have a few of my own. Your whole world is about to change. And you have a glimmer of an idea as to how, but nowhere close to the full picture.

Children change your world in ways that you could never imagine. But having a child also changes your finances in ways you never imagined either.

The average amount that it costs to raise a child annually varies from between $12,000 – 13,000, and it goes up each year with inflation.

That being said, there are more expenses incurred in the 1st year of having a child. So, just how much does it cost for that 1st year to raise a child?

The most expensive part of having a baby is actually giving birth. This is where the majority of the costs come from the 1st year of life. And the costs completely depend on:

That is a lot of different variables to consider when having a baby! So let’s break the costs down here by category to get a general ballpark idea of what we are looking at.

Overall, this means that the costs just to give birth can range from $4,900 – $28,500, which is not only a pretty huge gap but also a large chunk of money right out of the gate.

When there are just two of you, living in a smaller place makes sense. It also keeps your housing expenses lower. But as your family begins to grow, so do the housing costs, because we start to want more space.

Moving on from renting an apartment to buying a house is a big move! But, it is one that a lot of us make when we begin to have children.

Buying a home can have some pretty big expenses from the onset. The biggest of which is usually the down payment required, but that varies depending on which type of loan you qualify for. The average amount required for a down payment is 10% though, so keep that number in mind when you consider buying a house.

Even though you may have more up front costs, buying a home may end up costing you less in the long run. This is primarily due to the fact that you get more bang for your buck with owning a house versus renting.

Owning usually affords you more space for the same amount of money as renting a smaller place does, plus you get the equity if you own. Once you pay off your house, it falls into the asset category but renting will never fall into that category. So this is something to keep in mind for long term goals.

But the decision as to whether renting or buying is the best option for you is a big one. If you are still not sure, then there is a fantastic rent vs. buy calculator tool to help you make the best decision for your family.

I don’t know about you, but our food costs are one of the biggest parts of our monthly budget. With a family of 7, we hover around $800 a month for just our food budget alone. But the average grocery bill for a family of 2 is around $500 a month.

When there are less people in the house the grocery bill shrinks, which I happen to be a fan of!

But when a new baby is in the house, the food costs will certainly go up. This is not one of the biggest expenses within the 1st year of having a baby, but it can add up.

This is due to a few things:

Breastfeeding usually requires an extra 500 calories per day, just to account for the body processes needed to produce the milk. That is an average of 20% more than you were eating before, so add an extra 20% into your food budget for one person.

Formula feeding can vary with regard to costs depending on how much your child eats and which type of formula you use. But the average costs to formula feed are between $1,138 – $1,188 per year.

Baby food runs close to $1 per jar and most babies eat anywhere from 2 – 5 jars a day, depending on their age and stage of food introduction. That means you could be averaging between $2 -$5 a day extra, just for baby food.

Child care can be one of the biggest expenses, aside from child birth, that you incur in the 1st year. And subsequent years also, for that matter.

According to a report filed last year compiling data from all states with regard to child care expenses, the average a married couple spends on child care is 10%. That number inflates drastically if you happen to be a single parent to the tune of 36%. That is just crazy talk!

To translate that, the average cost of one child under the age of 1 can be anywhere from $10,000 closer to $20,000 per year just for child care alone.

When babies come, so do larger cars, in most cases. A lot of families decide that they want to upgrade to a minivan or an SUV with the impending birth of their first child. But buying a new car can cost you.

Adding a child to your healthcare plan will certainly cost you more. How much more depends on your health insurance, of course.

But, this doesn’t even include the higher deductible you will have due to the increased family size. So keep both of these things in mind when you are thinking about the healthcare costs in the 1st year.

Babies require a lot of clothes. Not only are they growing like wildfire but they have a tendency to soil clothes quite frequently. A lot of parents are lucky to get a multitude of cute outfits for their baby shower that will help out in the first few months, but what about the rest of the year?

The average cost for baby clothes runs around $60 per month, but this depends on your state and income level. However, this doesn’t include other things you need for them such as:

Just for these things alone, adding an extra $40 into your monthly budget will help cover them. But that makes the total for this category an extra $100 per month or a grand total of $1,200 per year.

The bottom line is simple:

This just proves how much a child CAN cost in the 1st year, but they are totally worth it.

How much did having a baby cost you in the 1st year? Were there unexpected expenses that you didn’t account for that threw your budget off? How would you budget differently with your next child?