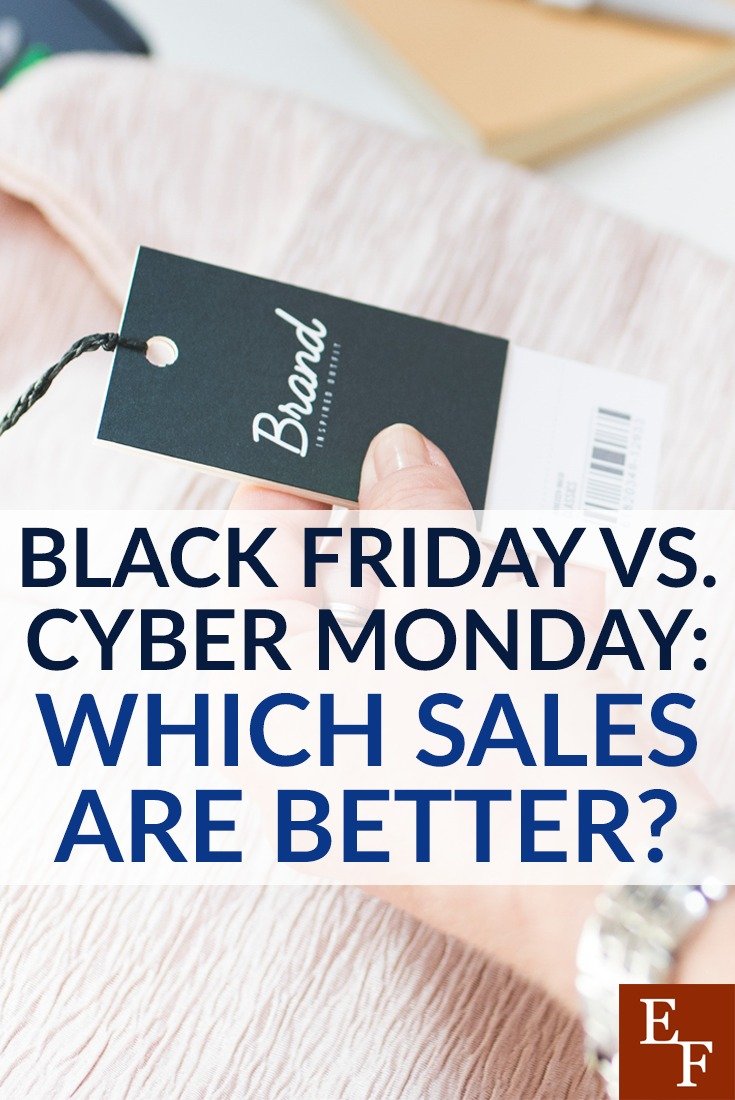 With Thanksgiving coming up around the corner faster than we can blink, we know that there are two more “holidays” right on its tail. That’s right! Black Friday and Cyber Monday.

Some people don’t look at them as holidays, but they certainly are. Both days have some fantastic sales, which help us prepare for the rest of the holiday season. But, which day really has the better sales?

When I was a kid, and even a younger adult, I used to LOVE Black Friday. Because this was the day where all of the best sales of the year happened. Or, at least I thought that was the case.

Since Black Friday began, its sole purpose has been to drive sales in brick and mortar stores into the BLACK, as opposed to the RED. So they would pull out all the stops to promote their biggest sales of the year to get shoppers into the stores. Once a shopper is in the store, it is inevitable that they will purchase other things as well.

Not only that, but Black Friday just happened to be scheduled for the day after Thanksgiving because that is when most people are off of work for a holiday weekend. So it only made natural sense to schedule the biggest shopping day of the year for the day when the most people would have free time to shop in a store.

Of course, this was before the internet became a THING. Once people could begin to shop online, Black Friday had to change. Now, Black Friday isn’t for sales ONLY at brick and mortar stores, but those same stores will have sales online also. It’s sort of a double whammy for the consumer.

With the advent of the internet being more widely accessible and used, Cyber Monday was born.

Black Friday drew in such large crowds, that other retailers wanted in on the game. Retailers didn’t have to be brick and mortar anymore, when the internet came along. Many of these retailers were strictly online retailers, but were missing out of the huge revenue due to not having brick and mortar locations.

So, they decided to create their own day to have the biggest sales of the year: Cyber Monday.

Which Sales are Better?

This is really the ultimate question, since we now have TWO holidays that are the biggest shopping days of the year. And, they compete against each other! This can only be good news for us, as the consumer, right?

It can be hard to weed through all of the sales, especially ahead of time, to figure out which ones are really the best deals.

The other caveat is that most brick and mortar stores now not only offer the in-store Black Friday deals, but they also offer deals online. On the same day! The deals online aren’t the same as the deals in the store either, so you almost get a 2-for-1 kind of deal on Black Friday.

Whereas on Cyber Monday, the deals are strictly online ONLY and will not be offered in any brick and mortar stores.

To break this down a little bit further, it really could all come down to which day has more sales. In most recent history, it appears to be that Cyber Monday has beaten out Black Friday.

It appears to me that Cyber Monday is wiping the floor with Black Friday, even though the latter runs 2 different deals on the same day.

How can that be possible?

A lot of it comes down to being able to shop on your phone, or mobile shopping, as it is more widely known.

Since a person has to be physically present in the actual brick and mortar store in order to get the deal, Black Friday has been losing out on sales. We live in a digital world now and we want to be able to get the sales with a click or swipe of our finger.

Not only does purchasing products on the phone increase sales, due to how darn easy it is, but it also increases how much money we spend. When people don’t have to physically pull out cash, they are more apt to spend more money. Because swiping a card or just hitting the “PLACE ORDER”  button on our phone, doesn’t affect us the same way that shelling out cash does. So, we naturally spend more money. Until we see the credit card bill, that is!

Ultimately, the day that has the best sales really comes down to each of us; our needs, desires, and styles.

Some of us are willing to physically drive to a brick and mortar store and stand in line for a good deal on Black Friday. In reality, since there are less and less people willing to do that each year, it becomes even more beneficial for those of us that are willing. I am one of them, if, and only if, there is something that we REALLY need or want and it is a REALLY good deal.

The rest of us would prefer to shop from the convenience of our own homes, offices or wherever our phones happen to be located. Sometimes the deals are better on Black Friday, depending on the item, but sometimes they are better on Cyber Monday. We each just have to decide how much it is worth to us and what we are most comfortable with when it comes to shopping.

Have you found Black Friday or Cyber Monday to have the best deals for you? Are you still willing to stand in line at a brick and mortar store for fantastic Black Friday deals?