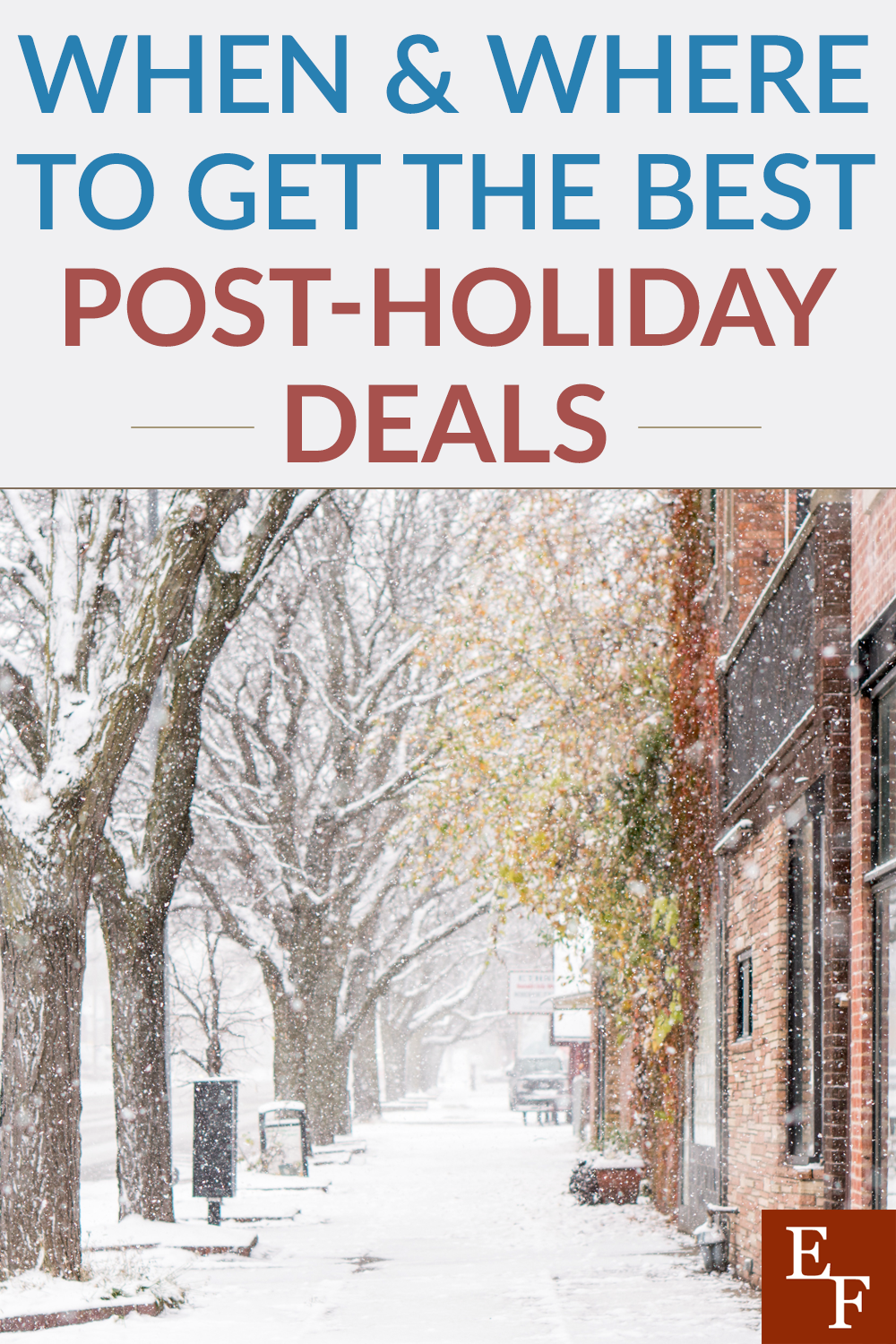 With the Christmas holiday coming to a close, and the gift giving done, it’s time to start thinking about the future. The future purchases that you need/want to make for deep discounts, that is! Since some of the best deals of the year can be found after Christmas, this is the time to take advantage. Make your list of needs and wants early and prepare to save some serious money with these after Christmas deals.

Most of these stores are running the deals from December 26 – 31st, since they are trying to clear out excess inventory prior to the New Year. However, some stores will run the best deals for only a day or two right after Christmas. So this is something to keep an eye out for while you are planning your deep discount after Christmas shopping bonanza.

We all need clothes, no matter what time of year it is. But if you can get them for a much cheaper price than normal, why on earth wouldn’t you? Well, this is the time to find some great deals and save money on clothes, so take advantage.

Here are some of the best stores offering great deals on clothes.

Up to 50% off Women’s clearance fashion.

Their clothes deals will vary by department, but some of them can be up to 50% off.

Up to 50% off outerwear for the whole family, up to 25% off dresses and shoes.

We don’t all need electronics, so these fall into the want category. But, if you have an old phone or laptop that you have just been limping along until you can find a great deal, this is the time for you to take advantage. I know that I fall into this category with the phone, so I am really excited to see what kind of great deals I can find.

These stores are the ones we found to be offering some of the best deals on electronics during this time.

While they not only run some good Black Friday sales, their after Christmas sales are pretty comparable. If not better! Certain TV’s will be anywhere from 20% – 50% off, some of their home theater equipment will be up to 50% off, and there will be really good deals on laptops and cell phones also.

Fry’s Electronics has very few physical stores but is one of the leaders in high-end electronics. They sell them at lower prices than most of their competitors, regularly. When you combine that with their holiday sales, they usually can’t be beat.

Certain electronics can run 15% – 50% off, depending upon the item.

Household goods is something that not all of us may be in the market for. But, if you have been waiting to get new sheets, towels, cookware, small kitchen appliances, etc., then this is the time for you to start hunting.

These stores will be running some great deals on household goods, so check them out.

Kitchen appliances can be up to 30% off.

Instant pots/pressure cookers can be up to 33% off.

Furniture is a category that can really get expensive. But, if you wait until after Christmas, sometimes you can find some pretty sweet deals on items you have really been wanting to replace.

These are some of the stores running great after Christmas deals on furniture.

They usually have good deals on furniture to begin with, but will be offering even better deals after Christmas. They already offer free shipping for any order over $49, but you could potentially get some great furniture for even better discounts, coming in at anywhere from 10% – 50% off.

They are a great place to shop for larger piece furniture sets. These can potentially be anywhere from 10% – 40% off the regular price during their after Christmas sale.

Most people don’t think of lawnmowers, chainsaws, blowers or trimmers during the holidays. But why not? Since it is off season, a lot of these items are already at a lower price point. But, during the after Christmas period of time, some stores are running even deeper discounts on these types of items.

Therefore, here are some of the stores running great deals on outdoor equipment.

Can be up to 50% off. This is an especially great deal on their already clearanced items.

They will be running the same deal to compete with Home Depot. But since they both carry different brands, shopping at your favorite home improvement store is the way to go.

They already beat some of the other home improvement store prices, but will run further discounts after Christmas of up to 40% off some items.

They offer free shipping for any order over $29, if you don’t have a store near you. But they will also be offering up to 30% off some items after Christmas.

Of course, toys fall into the want category. But, if you have kids, nieces, nephews, grandkids, friends with kids, etc., then this is the time to get shopping for toys. While the kids shouldn’t need any toys right now, there will be birthdays coming up in the near future, so why not prepare early and save some money doing it?

So, here are some of the best stores running toy deals after Christmas.

Since Toy’s R’ Us went under, Walmart is one of the biggest toy sellers around. They plan to run deals on all toys, that can be anywhere from 20% – 50% off, on average.

They are similar to Ollie’s Bargain Store in that they get new merchandise in every week. So they typically sell toys for around 70% off of the retail price, but will run some extra deals after Christmas.

Overall, since stores are trying to get rid of inventory before the end of the year, December 26 – 31st are when you should look for these deals. Some stores are closed, or have reduced hours on the 31st though, so that is something to look for ahead of time. However, the 26th is always a madhouse for shopping, so I would avoid looking for deals on that day, personally.

Where and when have you found some of the best after Christmas deals?