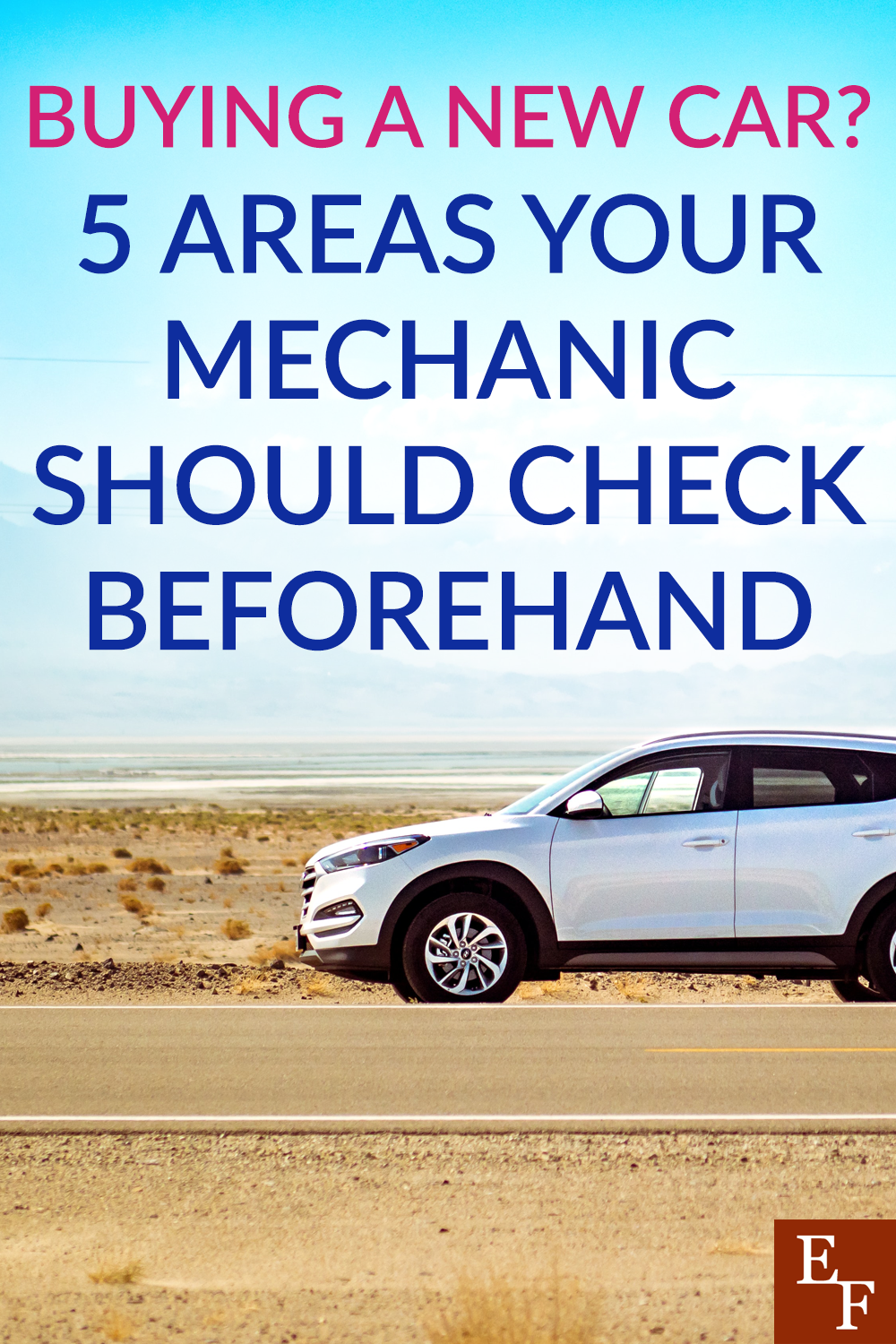 When it comes to buying a new car, a lot of times buying used is the way to go. This can save you a bundle of money in the long run, rather than driving a new car off the lot. But, when you purchase a new used car, there are quite a few things to watch out for. And if you aren’t careful, some of these items could cost you more than if you purchased a new car instead. So, when considering a new used car, it’s best to have your mechanic perform a pre purchase inspection. When you do this, your mechanic should check everything on the car and run a full diagnostic. There are a few major areas your mechanic should be checking for that will ultimately cost you the most money if you are unaware of the situation.

Tires, rotors and brakes can really wrack up in costs. Especially if you have to replace all of them at once! Most dealerships will replace tires and brakes on a used car they plan to sell if there is approximately 20-25% life left on them or less. But not all dealerships are created equally, so tires should be an easy one for you to check yourself.

The brakes will be harder for you to check, so you should definitely have your mechanic check those and the rotors. A typical issue I have seen with rotors is rusting. This is fairly common up north where the roads are salted for snow or in beach areas. And if the car you are purchasing wasn’t well maintained by the previous owner, then you could be in for a fun surprise.

While you can eyeball rust on the rotors yourself, you will want your mechanic to run a full check on these. And while they are at it, they should be checking the calipers too, since they directly affect the rotors and the brakes.

Depending upon where you live, and who your mechanic is, the average cost to replace each of these runs:

This means if you end up having to replace all of these items right after you purchase a new used car  you could be spending up to $2740 extra. OUCH!

Having stored codes in a car means that there has been an ongoing issue. It means that codes have either been thrown to set off the check engine light or pending codes have been occurring. Pending codes are things that are starting to go wrong with the car, but haven’t set off the check engine light yet. But it means that they will in the near future. So your mechanic should do a thorough check of any stored codes to ensure that there is nothing pending, or issues that have just been temporarily cleared.

Temporarily clearing codes to get a car sold is one trick that has been going on for quite some time now. You won’t see a check engine light on, but there is really an underlying issue that is being hidden from you. Until you drive off the lot and go about 100 miles or so, and then the light might pop on. Sometimes it takes longer than that, but ultimately, you don’t want to be stuck with a problem that existed before you bought the car. Because it could be either so major of an issue that it’s not worth fixing or cost you a pretty penny to fix.

Either way, that is not how you want to start out owning your new used car.

Structural damage could be small or large. The smaller scratches and scuffs are usually part of the new used car game, so those are to be expected. However, when you get into the larger things, such as frame damage, that’s where you can get into some serious trouble.

Therefore, your mechanic should check for things such as:

Of course, there are other items your mechanic should know to check, but these are the easy items they can look for. If the car you are interested in has frame damage, you may want to pass on it. If you are still really interested though, see if you can get a hold of the CarFax or TrueFrame report to get further information as to the damage sustained.

With each new year’s car release, comes more and more electronics. And when we have more electronics in our vehicles, we have a higher chance of things going bad. It’s unfortunate, but it’s the catch 22 of the increase in technology.

So, all of the electronics are things your mechanic should check for, but especially:

While some of the electronics on the car dashboard are likely to go kaput throughout time, they won’t affect whether or not your car runs. These higher ticket items will, and therefore, need to be given a thorough look. Overall, the costs of these items can run:

Which means, if you had to replace all of these electrical items, you could be looking at a price tag of $1390. That is not something else I want to tack on to the selling price, personally.

If the car you are interested in happens to have some underlying major engine issues, then you could be out thousands of dollars. And this is exactly what can happen if you don’t have your mechanic check the car thoroughly first. Some of the most common, and expensive, major engine issues include:

I, personally, have run across catalytic converter issues twice now. Once on a new car and once on a used car. And both times it cost me around $1500 to get it replaced since it was built into the manifold, as is common on most newer cars. That is a pretty decent chunk of change!

That doesn’t mean it always has to be that expensive. But, here are the most common price ranges for each major engine issue you could run across:

Now, the chances of you having to replace ALL of these at once are slim to none. But, if for some odd reason you had to, you could be looking at a grand total of $3375. I don’t know about you, but that would make me think twice about purchasing a vehicle!

Areas Your Mechanic Should Check Beforehand

Overall, there are 5 main areas your mechanic should check for you before you decide to purchase a new used car. These 5 areas are:

Having your mechanic take a look at all of these areas could potentially save you somewhere along the lines of $7505. That amount alone could be used on purchasing a second car!

Ultimately, having your mechanic run a full diagnostic on any car you are interested in will probably cost you some money. But, spending the extra $100 – $200 on a diagnostic could potentially save you thousands of dollars. I don’t know about you, but for me, that’s worth it.

Have you ever had your mechanic run a pre purchase inspection on a vehicle you were interested in and it saved you from making a mistake?