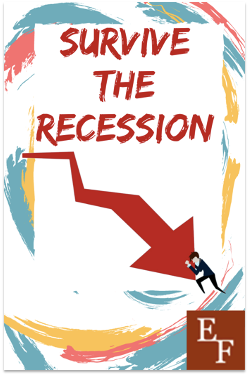 It was roughly 13 years ago when the mortgage crisis in the US triggered a worldwide recession. Most of us were unprepared for the economic turmoil that followed because we had little understanding of what was exactly going on. But call it a silver lining or fate giving us a break —everyone knows we are currently in a recession.

The on-going pandemic forced states to implement unprecedented social restrictions that shuttered businesses and made way for millions of layoffs and furloughs. Due to this, the CBO reports that the unemployment rate will hit 16% in the US this year, which will be considerably worse than the Great Recession of 2008 when the jobless rate peaked at 10%.

In such uncertain times, money spending becomes an art. Those who can perfect this craft can not only brave the recession but come out of it more financially stable than ever.

Recessions aren’t rare. They’re a regular part of the economic cycle. Although they can be triggered by different factors, their effects are pretty much the same; stock market plummets, unemployment soars and inflation recedes.

Usually, some individuals are impacted more by a recession than others. But there is nothing ‘usual’ about the current economic turmoil. People across all industries have been affected in one way or another.

Although the situation is grim, you can apply the below five strategies to weather the storm.

It’s easier said than done but the first thing anyone should do in a bad economy is save each penny. This means spending around 30% of your net income (earnings minus taxes) on discretionary expenses. You can make this easier by creating a monthly budget.

Prioritize your rent, groceries and utilities and suspend any expenses that aren’t necessary for survival. Most people are avoiding eating out anyways which is a good thing. You can even minimize your expenses further by cooking at home and avoiding takeaways.

For unavoidable expenses, look for deals that might help you save a few bucks. Coupons in particular are great for reducing household expenses, which is why up to 90% of consumers use them in one way or another. They are extremely convenient as well. If you’re shopping online, all you have to do is a quick Google search and copy paste a specific code.

So look for deals and discounts even if you’re ordering grocery items, hand sanitizers and face masks.

2.   Seek a Certificate of Deposit

In response to a recession, the Federal Reserve eases interest rates for boosting consumption and makes loans cheaper for different commodities. This is done to get the economy back on track.

However, this also causes banks to lower the interest rate they offer on deposits. Anyone that wishes to have a better return on their money should ensure they don’t have a high balance in their checking account.

A high-yield saving account is a good option in this situation but a more practical approach is a certificate of deposit (CD). At first, CDs usually have higher yields when compared to saving accounts. CDs have a fixed rate of return that protects you against the volatile nature of a recession economy.

Online-only banks in particular offer exceptional rates on CDs that beat savings accounts by a fair margin. But do conduct thorough research as there are several risks involved in this option.

Although it’s a matter of common sense, a great number of people still borrow money in a bad economy hoping that they will get back on their feet in no time. Sadly, this never actually happens with many debtors.

The worst mistake anyone can make during a recession is make guesses of the future rather than dealing with the situation at hand. Incurring additional debt is a red flag that your budget planning is ineffective and you need to cut some spending or sell some non-essential assets.

Start by cutting off your credit card. Likewise, forget about exercising your HELOCs. A few bad decisions during the crisis can trigger a lifetime of financial instability.

Building on the last point, you would need to pay off existing debt to create some much-needed room in your budget. Paying down high-cost debt like your credit card balance should be a priority.

Along with credit card debt, mortgages and auto loans could also be detrimental to an individual’s financial health. Luckily, student loans have comparatively favorable provisions which mean there is no real urgency in paying off this loan.

The on-going pandemic has made the job market extremely volatile. With a possibility being unemployment looming over one’s head, paying off obligation can prove to be an effective method of staying in control. Bankrate’s tools for calculating debt-payoff plans and balance-transfer credit cards that have 0% intro ARPs can help in planning debt payoffs.

Even in an expanding economy, eliminating high-interest rate debt is the right strategy. The lack of financial obligations allows you to save for emergency scenarios.

The job cuts in recession follow the same pattern. Employees that do not have college education get the axe while those with a bachelor degree or higher are generally safe.

Education is one of the most effective tools for fending off unemployment in a bad economy. Even if you’re not financially sound, having particular skills or training that makes you employable can be vital in a recession.

Business tycoon Warren Buffet gave similar advice back in April when the market started to fall. Instead of following the news and hoping that things will turn out just fine, it’s better to take charge of your own career.

Businesses are opening up across the US and the stock market looks better than it did a month ago. However, with no vaccine and thousands of new cases reported on a daily basis —we are nowhere near out of the woods yet.

To stay on the safe side, you would need to get your budget in order. Take all necessary precautions to be in a stronger financial position. The current crisis can overwhelm you but there’s hope for anyone that’s willing to make necessary adjustments.

If you get it right, any good financial habits you may pick up from a receding economy would prove to be beneficial even when things get better.