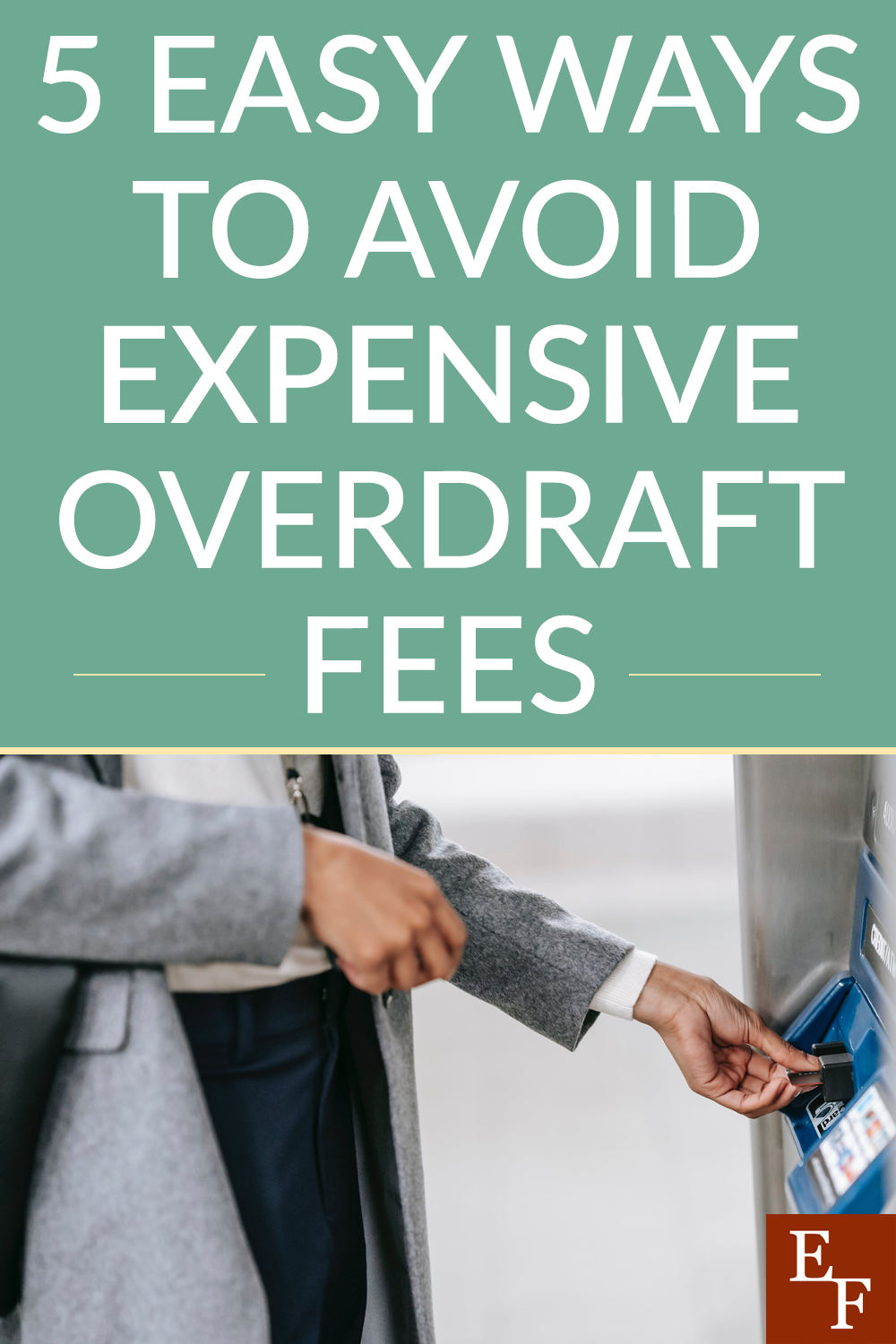 I recently received a notification from my bank that my account balance had dipped below zero, and I knew right away what was coming next. The bank charged me an overdraft fee for “lending me a hand!” Can anyone else relate?

Yes, even in your best attempt this can happen to anyone and according to Consumer Financial Protection Bureau, American consumers pay roughly $17 billion annually in overdraft fees and insufficient funds fees combined. Here are 5 ways to avoid overdraft fees from your bank.

What is an Overdraft Fee

An overdraft fee is where a bank will allow you to withdraw money from an ATM, make a debit card purchase or write a check for more cash than is in your checking account. The bank in return charges a fee for this privilege. Some banks charge an additional fee of $2 to $5 per day until your account regains a positive balance.

Overdraft fees are set by each bank, there is no one standardized fee. These are the overdraft fees charged by five of the largest banks in the United States:

Many times, these fees can be avoided with a few simple tips and tricks. Knowing how to avoid overdraft fees can save you money in the long run.

How to Avoid Overdraft Fees

Many banks provide an online alert feature that will send you an email when your checking account balance dips below a certain limit, say $50 or $100. These alerts let you know exactly how much money you have in your account and add additional cash for future spending. Balances can be checked online, via mobile app, by phone call, or by visiting an ATM or branch a few times per week. Paying attention to your accounts gives you the opportunity to act fast.

RELATED: How to Help Your Teenagers Open Their First Checking Account

Avoid overdraft fees by only spending the money you have in your pocket. It makes sense right? You can’t spend more money than you have in your wallet.  Using cash can reduce the time of balancing your checkbook, and it also can help you curb your spending.

RELATED: How to Pay for a Car in Cash

3. Opt-Out Of Overdraft Protection From Your Bank

Overdraft protection might seem like a great idea at first, but imagine having the bank pay for more than one transaction for you on a given day. For that favor, the bank will charge you a fee for each transaction. Luckily this is something you can opt-out of. Yes, you have the right to tell your bank to not allow you to overdraft your account and if you do so your card will decline at the point of purchase.

Another way to make sure you don’t overdraw your account is to get a budget going. When you’re following a well-made budget, you’ll be able to sleep well at night without worrying about where your next dollar is coming from or going to. Most financial experts say you should aim to have at least $1,000 set aside for emergencies

Try keeping a little extra in your account to cover those forgotten or unexpected charges. at times we completely forget about those recurring transactions like subscriptions or automatic monthly payments and those are the charges that take us into the red. One way to avoid overdraft fees is to make sure you keep a cushion in your checking account above and beyond what you normally spend each month.

If you’re a good customer and you have an overdraft because of one oversight, it is worth taking the time to call your bank and ask to have the fee forgiven. Often, if you’re not a repeat offender, your bank may waive the overdraft fee for you. It’s worth the try!

No one wants banks to keep dipping into their hard earn money, and that is pretty much what overdraft fees are. With the tips listed above, you can take steps to avoid these charges.  It is important to regularly review your finances and accounts to avoid getting overdraft fees. I also recommend that you track your spending habits and know how to budget all your transactions so as not to be in the red.

By being proactive, like finding banks with no overdraft fees, setting up alerts, and only using cash you are on your way to being in full control of your money. With the knowledge that you now have an overdraft fee, use that knowledge to ensure you never pay one again. I had to learn the hard way after being hit with an overdraft fee, but I empowered myself to make well-informed financial decisions after that incident.

What are some of the tips you use to avoid overdraft fees?