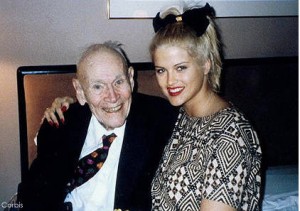 Marrying for solely financial reasons has always been frowned upon in our moralistic culture. As much as we may idolize wealth (as seen through our love affair with spoiled reality television stars), we still frown upon the blending of money and marriage when it’s for pure financial gain.

However, almost every woman who was once a little girl has played the M.A.S.H. schoolyard game, where you picked a number that would determine whether you lived in a Mansion, Apartment, Shack, or Home. And you can bet your bottom dollar that no little girl ever wanted to get stuck with Shack.

When choosing a partner for the rest of your life, doesn’t money ever come into play? While your partner’s salary or earning potential may not be the only factor in determining your decision to say “I do,” can we at least admit that it is a factor?

My mother would often tell me as a little girl to marry a rich husband. Whether she said it in jest or in all seriousness, I am not sure. I never took her words literally and now that I have gotten older (and have, indeed, married) I have translated her words from “Marry rich” to “Don’t marry poor.”

When you choose to marry rich, a person’s earning power is seen as a key factor in deciding whether to create a lifelong union, whereas when you choose not to marry poor, a partner’s salary is simply open of the last deciding factors, after it has been determined that you get along for a host of other reasons and that a lifelong union could actually be a possibility.

But say you met the man of your dreams—you got along perfectly and you knew you could be compatible for life (or as much as you can be). However, they were extremely poor, had mounds of debt, and you didn’t see any earning potential for them within the next ten years. Would you still consider marrying them?

Marrying rich is seen as a money-hungry tactic, while not marrying poor is seen as a smart decision. It’s important to be on the same page financially with your partner. It doesn’t necessarily mean that you both need to earn the same amount of income, but rather agree on the same financial goals for each other and your future together as a couple.

My husband, while definitely not rich, is by no means poor either. We have had our fair share of arguments over money, and I can see how having enough money would eliminate a large amount of our squabbling, since money seems to be pretty much the only thing we argue about (well, money and housework—however, if we had more money, we could also hire a housekeeper on occasion, and that would solve that issue as well). It would have been really nice as well to enjoy our first years as newlyweds without having to worry about money as much.

However, these are the choices we made, and while it has been a struggle, I am honestly happy with how things are turning out. I didn’t marry rich, but I didn’t marry poor either. And maybe that’s the best you can ask for.