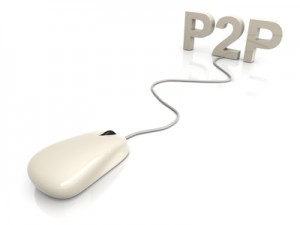 It’s interesting to me that so many people are afraid of P2P lending platforms, yet they’re more than willing sign up for – and max out – credit cards. Credit cards that are fleecing America. I think the fear stems from many factors, but the biggest issue is that p2p lending is relatively new to the marketplace, and anything new makes investors wary. Many people have quite a few fears in common, however. Let’s look at some of the issues would-be investors have with the online peer-to-peer lending model and the truth to put those fears to bed.

Fear of an Unknown Company

Most people, investors includes, have never heard of LendingClub or Prosper. The companies are relatively unknown (as is the model itself), which causes most people write the whole thing off as some sort of Ponzi scheme. But it’s not. It’s legit; it’s just hard for us to wrap our heads around being in the driver’s seat with our money.

Think about it: When you are a P2P lending investor, you, in essence, are the bank. You have the money to dish out to potential borrowers. They jump through the exact same background and credit hoops. They have a credit grade that lenders use to assess the risk. They’re bound by the same laws that would bind them had they sought a personal loan from a traditional lending institution. How is this different from walking into a bank and asking for a loan?

I know it may seem hard to believe, but people with really bad credit are going to have a higher chance of defaulting whether they obtain loan funding through a regular bank or online with a P2P lending platform. It is what it is. That’s why the best strategy is to spread your risk among many different credit grades and fund a wide range of loans in micro amounts.

Fear That it’s Too Good to be True

In an era where credit cards top out at almost 30% interest and savings accounts and CDs hover from 1 – 3% on good days, it’s not hard to see why we don’t expect much from our investments. We’re conditioned, as consumers, to pay through the nose for what we want and earn meager returns when we put our own hard-earned dollars to work.

That mindset is a true shame, because we can do much better. P2P lending is like a social uprising – we’re cutting out big business altogether and lending directly to one another. Websites like Prosper and LendingClub are merely the platforms that facilitate the action. Do you see the sheer power in that? We can get rid of banks and lend to one another, make substantially more money, and still enjoy the same safeguards that regular banks have at their disposal. Now how’s that for progressive lending?