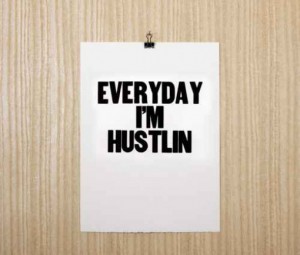 I once read a blog post where a couple said they paid off all their debt in one year by starting a side hustle and making an extra $1,000 a month–all of which they put toward debt. They made it sound so easy…”Look how we paid off our debt! All we did was make an extra $1,000 a month! Anybody can do it!” I wanted to punch them through my computer monitor.

Of course it’s easy to pay off debt when you make more money. Duh. The point is it’s not that easy to make an extra $1,000 a month.

There’s no big secret to paying off debt. You can read as many “How to Pay Off Debt” posts as possible and they’ll all boil down to two things: Reduce Expenses. Make More Money.

That’s it. No huge secret. But if it were so easy to do, everybody would be doing it.

It’s just like losing weight. Everyone knows that there is no secret to losing weight–it’s eating less and moving more. But how many of us actually do that when we’re trying to lose weight?

Reducing expenses is probably the easiest part of the equation to do when trying to pay off debt. Everyone will cut the small things first, and then when that’s enough, perhaps we’ll resort to drastic measures. I know that we moved into a shack for 16 months to save money and pay off debt. It was awful. The only door in the entire place was to the bathroom. The kitchen was the size of a closet. And speaking of closets…we had to share one, and there was no door. And we had our dog too. It was absolute misery.

We have since moved out of the shack and our living expenses have gone up. So the only way to continue to pay off debt was for us to make more money. For the past 9 months, we were pretty fruitless. We made a little extra money here and there from mystery shops, freelance writing and rebates, but our efforts were coming up short.

Then an opportunity appeared–a side hustle that would generate an extra $1,000 a month for about 10 hours of online work a week. At first, I hesitated. I didn’t know if I had the time to devote to the job. But I decided to just go for it.

And it’s been lucrative so far. I’ve used half the money to pay off debt and the other half to save for traveling. And for the most part, I am managing the workload just fine.

I know that not everyone can come up with a job that pays an extra $1,000 a month (don’t forget to save for taxes too!), but any little bit helps when you’re trying to pay off debt. Keep your eyes and ears open for any freelance opportunities to help you make more money and pay off debt faster.

Need a Place to Stash your Cash!