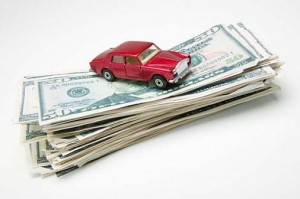 This past week, I scraped my car into a wall. The impact was so strong, it dented the driver’s side–a significant dent. I make no excuses for my horrible driving skills. It is the first time in my almost 13 years of driving that I will be making a car insurance claim.

As I called my husband to let him know what happened, I started bawling. I didn’t want to take away $1,000 from our hard earned savings to pay for such a silly mistake that was a direct result of my carelessness. If I had just kept the deductible at $500, we wouldn’t have to pay so much.

After I calmed down, I started thinking more clearly and realized: Having a $1,000 car insurance deductible is still the right choice. And let me explain why:

If the damage I had caused my car only cost about $700 to fix, I would not file an insurance claim and I would simply pay for it out of pocket because I wouldn’t want my car insurance to go up. How many times have you forgone filing an insurance claim just so your car insurance won’t go up? You figure you might as well eat the $200 difference in an effort to save your record.

So the reason a $1,000 car insurance deductible makes sense, is that if the damage were any less, you wouldn’t be filing a claim anyway. $1,000 is the perfect car insurance deductible because it’s not enough to make you go broke because you should have the amount in savings (which we do), but it’s enough that if you actually do need to file a claim, you probably will because anything over $1,000 is just too much to take out of savings.

If I’m not going to be taking advantage of a $500 deductible because more than likely I would be paying anything out of pocket up to $1,000 just to keep my car insurance from going up, then I might as well save the money on the premiums.

The key, of course, is to make sure you have the $1,000 in savings so that you don’t find yourself completely broke should you need to file a claim.

I actually recently took a look at my dad’s car insurance policy and noticed he had a $250 deductible. I told my dad, “When have you ever filed a $250 claim?” He knew he never had, because if the cost was anything between $1 and $500, even up to $700, my dad would most likely pay it out of pocket rather than risk filing a claim and have his insurance go up.

Put $1,000 into a savings account. Save money on the premiums. And be a cautious driver. That’s how you’ll really save money.

As for me, I am now riding a bike to work.