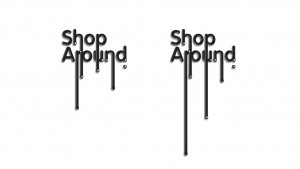 For some reason, there seems to be a negative disposition that shopping for car insurance is time consuming, scary, and an overall pain in the butt. I admit that I was under this same impression as well, until I had to force myself to do it.

About two months ago, I got into a car accident with my house, and the house won. It was a stupid move on my part, and I knew that it would eventually make my car insurance rise, especially since the body shop charged them $4,000 to fix my car.

While I was ready for an increase in car insurance, what I wasn’t prepared for was an almost $300 increase over six months, or $600 for a year. For one accident. In my entire driving history.

I was ready to throw a fit. So I put my big-girl attitude on, and decided to make some phone calls.

First, I called an accident lawyer to see if this was an average amount of increase since I hit my house not another vehicle but unfortunately, they weren’t much help. So then I called our car insurance company with the number at the bottom of our bill. I was on hold for about six minutes and was able to talk to a real live person. I think it’s much easier to talk to someone on the phone than try and figure out changes online yourself. Although of course they encourage you to go online and figure it out yourself, agents will actually know all the ricks and bells and whistles to try and get you the best rate.

I asked them if there was anything they could do to lower our bill. With a few changes (changing the deductible, etc), they were able to take off about $40, but still not anywhere near where we used to be.

Still not satisfied with what my current car insurance provider was offering, I decided to call some other companies. Ask around, get references from family members, friends and co-workers.  I thought that getting quotes would be a very time consuming process, but it surprisingly only took about a few minutes. I would search companies online, and call the number that said was for quotes. (I guess when you call that number, you’re put to the front of the line?). Another, and possibly even faster option, is to use an auto insurance comparison engine (something I didn’t know about at the time).

With my current insurance plan in front of me, I gave them the exact same coverage details so I could have an apples-to-apples comparison. To my surprise, the new car insurance company was more than $150 cheaper! And if I also bought renter’s insurance through the same company, I got an even bigger discount, making the renter’s insurance practically free! And best part of all, it only took a few minutes over the phone.

My husband had been with the same car insurance company for 13 years. He was a bit hesitant to change and he wanted me to call our old company back just to make sure this was their bottom line offer. So I did. And even when I told them that I couldn’t believe that one accident would cause such a large increase in car insurance, they said nothing. So I told them, okay well I’m going to have to cancel. And still they did nothing to keep our business.

For a savings of more than $300 a year, of course I was going to change our car insurance! Do not feel the need to be loyal to your car insurance company. To them, you are just a number. You need to watch out for your own money and make sure you’re getting the best deal available to you.