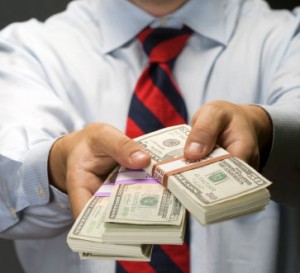 It’s probably been argued for as long as they’ve been around: when it comes to taxes, is it better to give than to receive? In an ideal world, it would be easiest if you could just guarantee that you wouldn’t owe any taxes or receive any refund. The personal finance community and most financial experts would argue that it is most certainly better to owe than to be giving the government an interest-free loan every year. But is that really what’s best for the average American, who–if by any indication of our recent economic climate–is most likely not the savviest when it comes to finances?

Why Owing Taxes is Better

Advice among the financial community is that in the debate between owing taxes and receiving a refund, it is almost always better to owe taxes. The logic being that by allowing the government more money than is due to them, you are essentially allowing them have an interest-free loan–money that you could be using to earn interest.

This logic may have made sense when interest rates were higher, but in today’s economy, most CD’s and savings account will yield less than 1% currently. And the stock market is anyone’s best guess right now.

The problem, of course, with owing money is that unless it’s a few hundred dollars, most people will find themselves owing a large sum of money that they can’t come up with. Everyone has heard the horror stories of people owing thousands, and having to set up a payment plan with the IRS. You never want to be in one of those situations.

Why Receiving a Tax Refund is Better

Proponents of a tax refund claim that receiving a refund is akin to a forced savings account. Every year, you receive a lump sum payment from the IRS and you never feel a hit in your take-home pay because it’s deducted automatically from your checks–before you even see a dime of it.

However, the money you receive isn’t a bonus, it was your money to begin with–money that could have been used on monthly bills, gone toward your IRA or 401K, or even, you know, earned interest in a savings account.

Owing Taxes Vs. a Refund: Which is better for the average American?

I can see both sides of the argument. I agree that perhaps the best option for the savvy financial consumer is to owe taxes rather than to receive a refund. But the reality of the situation, is that in most cases, we are not dealing with savvy financial consumers. The average American is still wallowing in debt. Why would we add to their misery by encouraging they receive a bill in April that they may not have the funds to pay because they obviously haven’t been saving?

I think for the average American–given today’s incredibly low interest rates–receiving a refund may be a better option.