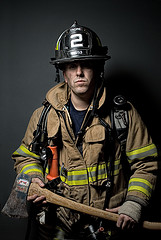 My husband and I argue about money. He spends a lot, and I would like him to spend less. But the thing that my husband spends money on–and the reason for the biggest re-occurring argument about money that we have– would probably shock most of you:

My husband spends a lot of money on food.

You see, he works at a fire station, which requires 24-hour shifts. This wouldn’t be an issue if he were earning a California firefighter salary (they’re paid well), but he is not yet a firefighter, even though we would love him to be. In fact, he only make a few dollars more than California’s minimum wage–and yet every day, he needs to put $10 into the food pot at work, plus an additional $5 every rotation for food staples, like ketchup, coffee, etc.

As I was calculating our budget today, I realized he had spent $172 in 11 days–all on food for work. I just about flipped my lid.

Because even though he is spending $10 a day on general food, there is also the “snacks” he likes to get when he’s out on the field. And those snacks add an additional $10. For every day he works, it is costing $20-30 a day just to feed him!

Plus, if he makes a station visit, where he visits another station to get advice on becoming a firefighter, it is an unspoken rule (and personally, I think, a stupid rule) that you have to bring some type of food item, so there goes my husband to the store to plunk down another $50 on name brand coffee and treats for firefighters.

This has been the number one source of contention in our marriage the past two years: how expensive the process is to become a firefighter even though you’re getting paid squat on the journey there. Honestly, I don’t know how un-married wannabe firefighters do it if they don’t have a wife financially supporting them.

It feels like he keeps spending money, while I keep trying to make money, and it has definitely worn me down.

But we keep at it, because we are so unbelievably close to my husband becoming a firefighter. And when he does, it will be the second happiest day of my life (the first being the actual day I married my husband).

Because yes, while the road to becoming a firefighter has been so incredibly difficult at times, I know that we are thisclose to it being over. And the reward of having a stable income and a prestigious career will be unbelievably worth it.