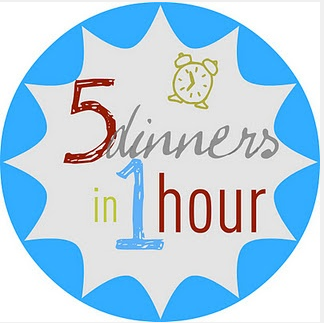 There are two kinds of cooks in the world. Those that love to cook and don’t mind spending a lot of time whipping up delicious, gourmet foods. Then there are those who are like me. I don’t hate cooking. What I hate is the clean up afterwards, the trying to cook with a toddler wrapped around your leg, and trying to lose weight while making the rest of the family happy. Oh, and did I mention I want to save money too? What a headache!

Thankfully I came across the site, 5 Dinners in 1 Hour. I bought a three-month subscription (with a coupon code of course), and downloaded the sample menu. I wanted to review the company in full honesty, since so many of the reviews available may have been a little biased or they didn’t actually review the product. So here it is:

Before I hop into my thoughts on the site, let me give you a quick low-down of what 5 Dinners in 1 Hour is. The site has a month full of menus to download when you purchase a subscription. A week’s menu includes five dinners. Each week then has an assembly list, cooking list, and a grocery list. The menu also has the equipment needed (i.e. how many bowls and freezer bags) and ideas for side entrees and meal substitution (i.e. replace pork for chicken). The ideal is to use the grocery list to do your shopping, then you assemble five meals and place them in the fridge. The assembly part is supposed to take an hour or less. You take each meal out the night you plan on cooking it and cook it according to directions. The plan is supposed to save you time in the kitchen, as well as keep your wallet a little fuller.

I was a little nervous when I first purchased the three month subscription for 5 Dinners in 1 Hour because I didn’t want to waste $12, and I wasn’t sure which menu plan I wanted – the Classic, the Clean, or the Gluten-Free. Thankfully, the site allows you access to all three. So a three-month membership gives you access to nine different menus, which each have four weeks of plans in them. Some recipes were duplicates though from one menu to the other.

I am following a low-glycemic clean eating style diet, so I only wanted recipes that I could fit into my way of eating. This took a lot of the Classic menu recipes off of my list. However, I did find a lot of recipes in the Clean Eating section that worked perfectly. I also found a few recipes in the Gluten-Free menu too.

I finally jumped in feet first into the plan. I found a menu I wanted to try (I actually ended up doing 4 meals instead of 5), and then took my list and went shopping. I paid about $48, but that was for mostly pantry staples I did not have, and will not have to buy again for a while. I think in reality, it cost me about $30 to assemble the 4 dinners.

As soon as I got home from the store, I started to assemble everything instead of putting the groceries away. I first got out everything I needed (as the site suggests), and that made things fly by faster. I ended up assembling my four meals in about 30 minutes and then cleaned up for another 20 minutes (though my kitchen was quite messy beforehand).

That’s it? Seriously! I loved how fast it went and that dinner is practically ready for the next four nights. However, this plan will not be a winner if it doesn’t taste good. So I guess that means you have to come back next week to see how everything turned out.

The company provided me with a sample menu, however, I choose to buy the clean eating meal plan to better know if this site would work for me and my family. All opinions are 150% mine.