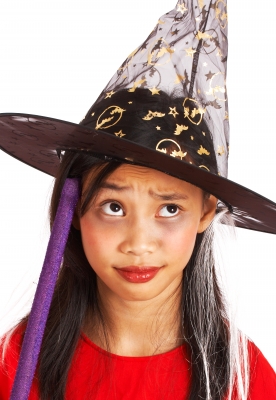 It’s Halloween night, and there are not too many trick or treaters who have come to my door!

I imagine it’s because of the bad weather. It’s cold and rainy here. However, as soon as the skies clear, there are going to be several ways that both you and I can save money for the holiday next year. So, even it’s a little dreary outside right now, it’s time to look ahead to saving money for next year’s festivities.

I saw so many parents who were rushing to pick out a Halloween costume over the last few days. I completely get it; parenting is hard. Halloween is definitely not high on the list of priorities. When I’m a parent, I can’t imagine I’ll be super organized for Halloween either. However, when you buy costumes right before the holiday happens, you’re not going to get anything on sale! And we all love sales, don’t we? In fact, the costumes could be even more expensive, and you could have less options about what your kids can be. Similarly, I’m sure there are downsides to buying costumes a year early. Your kids could hit a huge growth spurt or really protest the costumes you picked out for them. Still, they are worth a look to see what you can find!

2. Trade With Friends and Family

If you know a lot of parents or your child has a certain playgroup, ask if they’d be interested in trading costumes next year. There are likely a lot of varied age groups and sizes, and Halloween costumes are often made quite big. Doing an exchange like this helps you to cut down on costume costs and also gives you a ton of options in terms of what your kids can be next year. My own brother was a power ranger for about 5 years in a row, so I’m pretty sure kids can repeat costumes if all else fails!

I know; we’re not all Martha Stewart. I sure wouldn’t want to try to sew a costume from scratch. However, there are tons and tons of ideas online about different costumes you can make without having to bust out your dusty sewing machine. Try searching Pinterest or do a general search for homemade Halloween costumes. I’ve seen a ton of ideas, from jellyfish to superheros that can be created with things your kids already own.

One thing I would avoid saving money on is candy. There is going to be a ton of candy on sale over the next few days, but I wouldn’t want to eat candy that’s a year old. To be honest, it probably wouldn’t even last a year in my house. I’d give it about a month before we gobbled it all up! So, that’s one thing I won’t be searching for, unless it’s really, really cheap, and I can resist putting it in my candy jar!

Ok, enough about me. How are you going to to save money for next year’s Halloween bash?