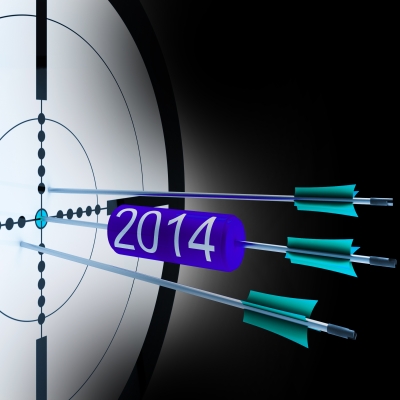 It’s hard to believe that the new year is here. It seems like 2013 was the fastest year yet! It’s always fun to set some goals when the new year is off to a fresh start, so here are some of mine below.

2013 was the first year I opened an IRA, and I’m proud to say that I maxed it out. It wasn’t easy and was basically funded by side hustle income, but I’m so excited that I achieved this goal. Things will be a bit more complicated in 2014 because I am now 100% self employed. This means that my income isn’t guaranteed and that it might be a little hard to save fully for retirement. Still, it’s an important goal of mine, and I hope to reach it!

2014 will be a big year for me because it’s the year I’m going to become a mom! I’m having twins in April, and I know my life and my finances are going to change dramatically. My big goal is to have a small amount of “baby stuff” in the house. I don’t want my kids to be overwhelmed with gadgets and toys. I’m hoping that we can have a modest and normal home without all the trappings of materialism. This starts early, so that will be one of my goals for 2014.

3. Live Below My Means

I know this is a pretty blanket statement, but it’s something that I have to constantly remind myself. Now that I’m living back in the United States, it’s getting harder and harder to resist all the little “extras” that life has to offer. In fact, my spending was pretty out of control in December mostly because I was stocking a new house and getting everything I “needed” to live on a day to day basis. I realized after paying a pretty large credit card bill that I can still embrace the minimalism that I had while living the island life the last three years. It’s so easy to get caught up in the American culture, so 2014 will be a year of simplifying and focusing on living below my means.

You can probably tell from the paragraphs above that I’m definitely in a nesting stage. I keep mentioning minimalism and getting organized and streamlining my life. It feels so great to know where everything is. When you put things back where they belong, there’s just a sense of comfort and stress free living that I just love. In 2014, I’m going to declutter, consign some of my old work clothes, and basically try to live with less. It’s a great goal that I know many others share. It can seem overwhelming, but taking a little bit at a time or one room at a time can make the process go much smoother and faster.

I’m sure that I’m not the only one with some goals for 2014, so please share yours in the comments below!