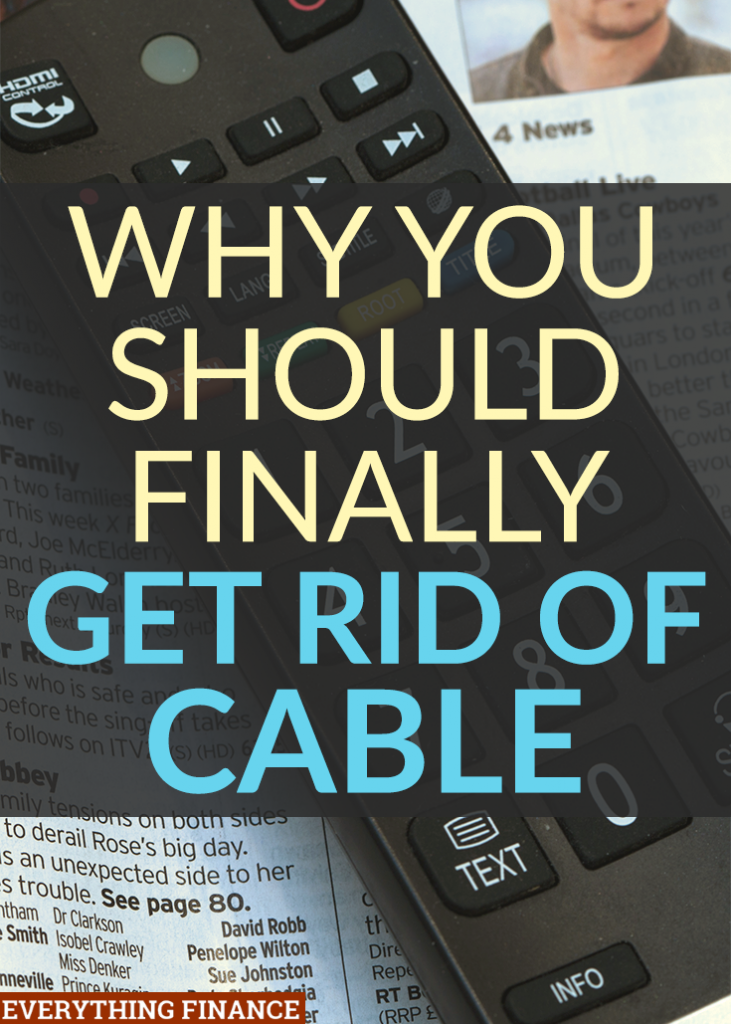 I really don’t know what took us so long. For months, we toyed with the idea of finally cutting our cable cord, but we were never able to break down and do it. We loved this show and that show and then another new one, until we, like so many Americans, ended up watching way too much TV every night.

Change is hard, but we knew we needed to make it happen. So many customers are cancelling their cable subscriptions in droves because the contracts are so long and expensive, and we wanted to join their ranks.

At first, we dipped our toe in and just got the smallest cable package that we could get, but that still cost us a whopping $80. This reduced our channel selection, and we reduced our television consumption as a result.

Once we got used to that, about 6 months ago, we (finally!) cut the cord on our cable subscription, cancelling it for good. We only wish we’d done it sooner.

We didn’t want to give up TV completely, but we wanted to reduce our consumption of it and save some money in the process. You can do it, too. Here’s why you should finally get rid of cable once and for all.

TV is a Time Suck

Watching television is, for the most part, a complete waste of time. It’s passive entertainment, and all of us — not just our kids — look like zombies when we watch TV, completely zoned out and glazed over. It’s not a pretty picture.

It’s so easy to come home every night from a hard day at work and get sucked into the TV, but we decided that we didn’t want our family to be crowded around the television every night. We didn’t want that for our 4-year-old, and we didn’t want it for ourselves, either. There were so many better things we could be doing.

We already have enough screens to worry about between our cell phones, laptops, and tablets. We knew we wanted to reduce our TV time, especially while our daughter is still so impressionable. The easiest way to reduce screen time is to cut your cable so that it’s not even an option. If it’s not available, then you won’t even be tempted.

Thinking about cutting the cord? Here are 4 reasons to quit paying so much for a #cable package! Click To Tweet

We Have Cheaper Options

The days of expensive cable TV subscriptions are numbered due to the availability of popular shows on Netflix, Hulu, Amazon, Sling TV, the internet, and even an old-fashioned antenna. With so many options, the reasons to keep an expensive cable subscription are limited.

With the extra money we saved the first month without cable, we purchased an antenna for our house. This allows us to get the major networks and PBS, which actually ends up being enough TV to meet most of our needs. We can still keep up with certain shows we like, and our daughter gets to keep watching her favorite (and kid-safe) PBS cartoons in the mornings. The best part is that it doesn’t cost us a monthly fee to watch, only the upfront cost of the antenna.

For the shows we worry about missing on other networks, the internet usually has the episodes to watch. You may not get to watch it live, but waiting a day or two to watch your favorite show is worth it to save the money that you would otherwise send to a cable conglomerate.

My husband also has an addiction to college football, which used to be the number one reason we retained our cable subscription. When he discovered that Sling TV would give him ESPN at a much cheaper option, he jumped at the chance. It’s only $20 per month without a contract, and we plan to cancel after football season is over.

Your Time Is Valuable

We may not realize it when we’re doing it, but we’re giving up a lot of our time to stare at our TVs. Not all TV is bad, but it’s important to be aware of how much we’re actually watching, how much our kids are watching (and learning from it), and how many other activities we’re giving up in order to watch a few mindless TV shows.

Our time is valuable, and we don’t need to waste it in front of the boob tube. That kid sitting next to you? They would probably rather play with you than watch TV (and it’d be better for them, too). That side hustle or new hobby you’ve been wanting to start, but feel like you don’t have enough time for? Try cutting TV from your life and see how much time you gain back to pursue your passions.

Although watching TV may be a relaxing time for some, especially after a long day at work, once you cut your cable, there are plenty of other (better) ways to relax. Reading a book, taking a power nap, enjoying a cup of hot tea, or taking a bath are several great ways to unwind at the end of the day. They’re much more relaxing (and fulfilling) than plopping down on the couch to watch the next episode of the Kardashians.

I also got tired of feeling like I was double-paying for TV, and in a sense, we’re all doing just that when we pay for cable. Not only was I paying over $100 per month for the service, but I was also having to sit through 8 minutes of commercials per each 30 minute TV show. That’s almost a third of the time spent watching advertisements, which made me feel like I was paying twice. Why do I have to pay for TV and watch ads? It just seems unfair.

Since we’ve gotten rid of our cable TV, we’ve gained so much of our time and money back, and we haven’t regretted it. We actually don’t know why we didn’t do it sooner. If you haven’t yet given up your cable TV, I’d encourage you to do so. There are so many better, more productive ways to spend your time, and I can assure you that after that first month, you won’t miss it a bit.

Do you think you could do without your TV? Have you cut the cable cord yet? Are you considering it?